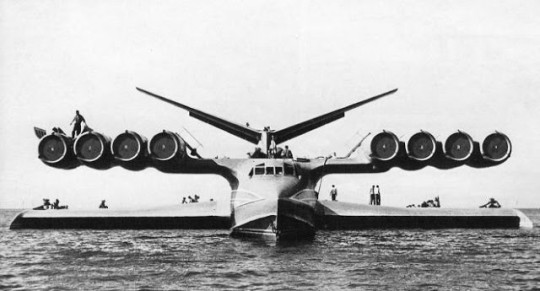 The notion of a ground effect vehicle has been around in the Russian army ever since the height of the Cold War. Severely outmatched from a technological standpoint by the Americans, the Russians needed a machine capable of sneaking low enough not to be detected by radar and at the same time high enough not to be detected by sonar, should a trip from Europe to North America needed doing in haste. CONCEPT
A ground effect vehicle, also know as the ekranoplan because of the Soviets, is a machine capable of hovering above a level surface. The machine uses the aerodynamics principle that states increased lift and decreased aerodynamic drag can be generated by wings when traveling close to a fixed surface.

Ground effect is created when wingtip vortices and downwash are disrupted due to the proximity to the ground. This, in turn, leads to lower induced drag which increases the plane's speed and lift, making the craft capable of hovering at very high speeds. The lower the aircraft is, the greater the effect becomes.

Airplanes experience ground effect near the runway while taking off and landing. As soon as some distance is attained, they enter free flight.

The ekranoplan is incapable of free flight, maintaining a set distance from the surface, usually water. Because they don’t achieve free flight, they are not officially listed as aircraft, but as ships. THE CASPIAN SEA MONSTER

Back in 1967, as the arms race heated up between the world’s two superpowers, the CIA discovered a strange metal construction near Kaspiysk, a city in the Republic of Dagestan, Russia.

The discovery made CIA officials scramble for years to find out what the construction is and what is its purpose. So intrigued were America’s finest with the plane they found that they began pushing for the of the world’s first use of a drone, to be sent to Russia and take a closer look at the monster.

Internally, the Caspian Sea Monster ekranoplan was named Korabi Maket, which in Russian roughly translates as ship prototype. It was conceived between 1964 and 1966 by Rostislav Alexeyev from the Central Hydrofoil Design Bureau, an organization specialized in the creation of hydrofoils, air cushion craft, and air cavity vessels.

It was not necessarily the size of the craft that spooked the West, but the fact that such a machine could take to the sky and threaten the Western way of life. It took CIA nearly two decades to realize that the KM is incapable of flying, and that scared them even worse.

Unfortunately for the Soviets, the KM did not make it into active military use. The development of the project went extremely slow. It flew for the first time in 1966, piloted by Rostislav Alexeyev himself. Fifteen years later, it was still in testing stages and was undergoing almost continuous changes,

In 1980, due to a pilot deciding to take off without giving the plane full throttle, the KM crashed in the Caspian Sea and sank. It was never recovered.LUN-CLASS MD-160

The successor of the KM, the Lun-class MD-160, was designed by the same team and began testing in 1975. It was powered by eight Kuznetsov NK-87 turbofan engines, each developing 28,600 lbf of thrust and mounted on forward canards.

This version was used by the Soviet navy for three years in the Black Sea, from 1987 to 1990. It currently lies at a naval station in Kaspiysk. Its field hospital sibling, Spasatel, was never completed.

At about the same time they were developing the MD, the Russians started operating the A-90 Orlyonok, a class B ekranopla. Unlike its siblings, it was capable of flying at altitudes of 3,000 m (9,800 ft), but also hover al low altitude. It was created as a military transport aircraft and flew between 1979 and 1993.

The Orlyonok was powered by two Kuznetsov NK-8-4K turbofan engines that worked in conjunction with one Kuznetsov NK-12MK turboprop unit.