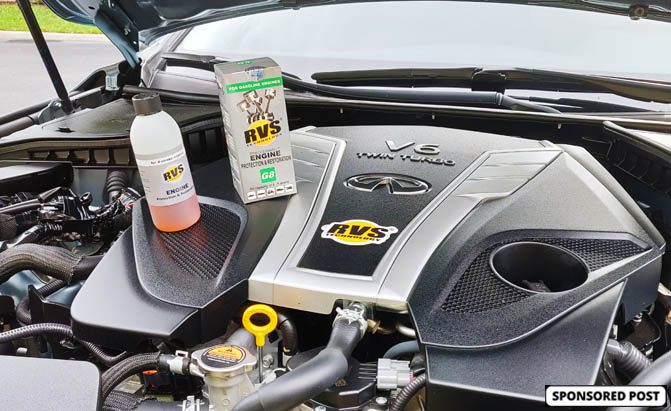 There isn’t a driver alive who doesn’t want their car’s engine to last forever; unfortunately, the fact of the matter is, even normal, everyday use eventually takes its toll over time. No matter how religiously you change your oil and keep up with other recommended regular maintenance intervals, anywhere metal contacts metal within an engine, there is going to be friction – friction that slowly wears down parts, alters tolerances, and given enough time, reduces performance and efficiency. And while this is a reality for every engine, it’s an especially big concern in performance applications, where sustained, frequent high RPM operation further exacerbates the issue.

Of course, there are myriad oil additive products out there that promise to restore lost performance and efficiency by altering the lubricating properties of your engine oil. Many of them are highly regarded, well-engineered go-tos recommended by plenty of automotive techs and shadetree mechanics. But the sad truth is, these additives represent little more than a bandage, only temporarily covering up the issue and requiring another treatment with each oil change, without doing anything to permanently restore the engine performance you’ve already lost.

Thankfully, now there’s another alternative – one that can truly return your engine to its former glory without requiring a complicated and costly rebuild.

Originally hailing from Finland, a company called RVS Technology has come up with an engine protection and restoration solution that permanently treats worn surfaces by coating them in a hard metal ceramic layer that promises to last up to 60,000 miles – meaning there’s no need to re-apply with every oil change, reducing both cost and environmental waste. That metal ceramic layer relies on  patented Triboceramic Nanotechnology, resulting in a smooth, mirror-like surface with a low coefficient of friction, bonded directly to the worn metal surface.

But what exactly does that mean for you and your engine, in layman’s terms? Just check out this test: RVS Technology treated a 2000 Honda Civic with their patented engine treatment over a year ago, and this January, the car hit 2,900 miles while being driven around in the punishing South Florida heat. (Just to be clear: treatment with RVS Technology does eliminate the need for motor oil, so please don’t put your own car through this. The following is intended for demonstration purposes only.)

While relatively new here in North America, RVS Technology has been in the European market for over two decades, putting its signature Triboceramic Nanotech to the test in the most extreme of conditions: motorsport racing.

It’s also been tested by the Fraunhofer Institute – which observed an average cylinder compression increase of 12 percent after treatment – as well as independent testing by the renowned TÜV/SÜD in Germany, which revealed fuel consumption and CO2 emissions reductions of up to 5.6 percent.

Now, RVS has made their products available to the North American market, including its G4, G6 and G8 Triboceramic Engine Protection & Restoration treatments, which are suitable for engines with oil capacities of up to 4, 6 and 8 quarts, respectively. And, since RVS is not an oil additive, it can be used in any engine, and does not alter the properties of your preferred engine oil in any way. All three treatments have been proven to restore lost horsepower and fuel economy, reduce emissions, and cut down on excessive engine noise and vibration – and unlike traditional oil additives, it can actually restore the worn metal surfaces in your engine as well.

It’s this signature feature of RVS’s patented Triboceramic Nanotechnology – that it will repair friction wear on surfaces pretty much wherever they exist – that has led the company to adapt the tech to transmission and power steering treatments, too. While not meant as a cure-all for transmission slippage (again, it only works on metal parts), reducing the friction between the metal gears, bearings and valves inside your transmission can allow it to operate more smoothly – not to mention quieter. Furthermore, by helping to reduce the internal heat production that burns oil (one of the main causes of transmission failure), RVS Tech can help extend the life of the transmission itself, whether it’s manual or automatic.

Interested in learning more about how RVS can help reverse wear and tear on your engine? Visit the RVS Technology website for more info, and use the exclusive coupon code “autoguide” to get 10% off your order, plus free US shipping.