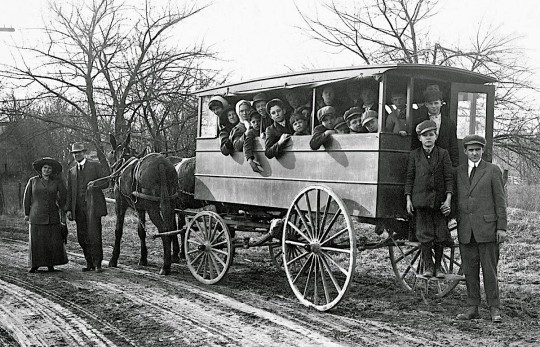 Of course, you all know the story of how kids come into this world, so we won’t get into that right now. We will, however, get into a school bus – metaphorically – and travel through history to have a quick look at how school buses came to be.

School buses are used to transport kids from various locations to the schools they attend. The need for them arose from the fact that there were no means of transport linking certain areas to certain schools, or from the fact that public transport as we know it is not all that safe for youngsters.

To be noted before getting into it is the fact that, despite several countries now operating buses with the sole purpose of taking kids to school, it was the good old America that set the trend. Furthermore, few countries except for the U.S. and Canada use purpose-built buses for this task.THE KID HACK

Back in late 19th century, people went to school primarily by foot. Lucky ones resorted from time to time to horse-drawn carriages known as kid hacks. And no, a hack is not a computer-related term here, but is short for hackney carriage.

Kid hacks were usually capable of transporting around 20 children, loaded through the back as not to scare the animals drawing the carriage.

Hacks were out pretty much as quickly as they rose, as the increasing number of horseless carriages being developed soon led to the creation of the school bus. For a time, however, a mixture of carriage and bus was used: wooden bodies which were mounted on regular trucks, which could be detached when the machine was used for something other than transporting pupils.WAYNE WORKS' SCHOOL CAR

In the early days of kid hacks, one of the main manufacturers of such means of transportation was Wayne Works. Their first venture into this market came following a request received in 1892 from a school in Ohio, which asked for a purpose-built carriage.

The resulting product, called School Car, was a horse-drawn carriage that featured a cabin with perimeter seating on wooden benches.

In 1902, a fire destroyed the Wayne Works facility and forced the company to rebuild a new one, this time with the goal of producing bodies for motorized cars. And for a while, they did just that.

In 1910, Wayne ventured once again in the education industry with the launch of the motorized School Car. This is the first documented release of a school bus built on the chassis of an automobile. As opposed to its precursor, it had padded seats instead of wooden benches.

Over the ages, until its demise in mid-1990s, Wayne Works will have a major say in the way in which school buses are designed today. BLUE BIRD FORD MODEL T

Today, one of the largest school bus manufacturers in the U.S. is the Blue Bird Corporation. The company came to be in the late 1920s after Ford dealership owner and industrialist A.L. Luce decided to manufacture a bus body for the Model T.

The idea popped into Luce’s head after being asked by one of his customers to build a wooden body for the Model T so that he could transport workers to and fro. Being made of wood, the body of the truck did not last long and was lost to the elements.

Having learned a lesson, Luce decided to use steel as panels for the body. He also used roll-up canvas side curtains for windows.

Soon, his idea laid the stepping stone for others to follow in his footsteps. So many companies began rolling their own buses, that a building standard was needed.FRANK W. CYR AND THE YELLOW SCHOOL BUS

In 1939, American educator Frank W. Cyr decided to do something to provide some rules for school bus manufacturers, so he organized the first-ever conference on school transportation.

The conference followed years of research he conducted that showed kids all over America were traveling to school in an incomprehensible variation of buses or even coaches from the old days. He was upset with the uneven coloring, age, and state in which these vehicles presented themselves.

So, in 1939, he summoned at Teachers College at the Columbia University transportation officials from across the U.S. and representatives of the companies building such buses. The conference, being funded by the Rockefeller Foundation, drew them all there.

They talked, debated and then talked again before all agreeing on 44 standards to be applied to all school buses. They would govern body length, height, aisle width and so on.

Most of these standards have changed since, but at least one remained: the yellow.

Officially, the color used on the buses is called National School Bus Chrome. It was chosen because black lettering on yellow background was said to be the easiest to spot in semidarkness and is noticed the quickest by peripheral vision.

As soon as these standards were in place, school districts began buying and operating their own fleets. As the number of students rose, the size of the trucks increased as well. As safety features were invented, they made they way into school buses.

As per a report by American School Bus Council, there are now around 480,000 school buses operating in the U.S. They carry 25 million children, making this operation one of the largest form of mass transit in the country.