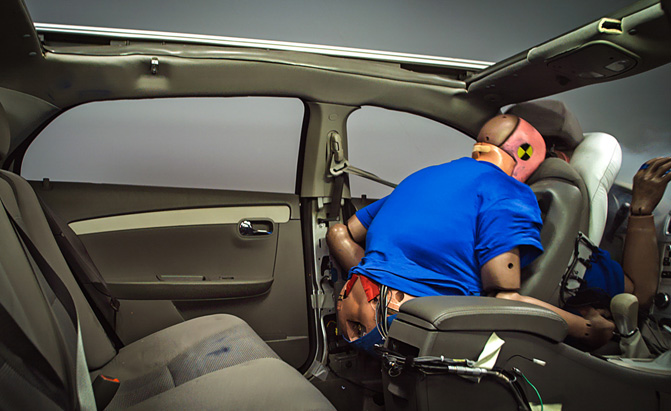 In a recent study conducted by the Insurance Institute for Highway Safety (IIHS), four out of five adults surveyed said they don’t bother buckling up in the back seat when taking a short trip or traveling by taxi or ride-hailing services. The survey also found many rear-seat passengers believe seat belts aren’t necessary because they believe the back seat is safer than the front. But in 2015, IIHS and The Children’s Hospital of Philadelphia published a study in , which found there is no difference in the risk of dying in a crash when seated in the rear compared with the front seat, for restrained occupants ages 13 to 54 in model 2000 and newer vehicles. In fact, belted occupants ages 55 and older had a higher relative risk of death when seated in the back than when seated in the front. An unrestrained rear-seat occupant is nearly eight times as likely to sustain a serious injury in a crash compared to a restrained rear-seat occupant. Not wearing seat belts is also a traffic violation and if you get caught violating seat belt laws, you might need the services of traffic lawyers to work on your defense.

SEE ALSO: A New Study Says Passengers Might Not be as Safe as Drivers in a Crash

A total of 1,172 people were surveyed for the study between June and August 2016, all of whom had ridden in the back seat during the preceding six months. Of those surveyed, 72 percent said they always use their belt in the back seat, while 91 percent said they always use their belt while seated in front. Nearly 40 percent of people surveyed said they sometimes don’t buckle up in the rear seat because there is no law requiring it. And if there was such a law, 60 percent of respondents said it would convince them to use seat belts while sitting in the back seat.

“For most adults, it is still as safe to ride in the back seat as the front seat, but not if you aren’t buckled up,” says Jessica Jermakian, an IIHS senior research engineer and a co-author of the study. “That applies to riding in an Uber, Lyft or other hired vehicle, too.”