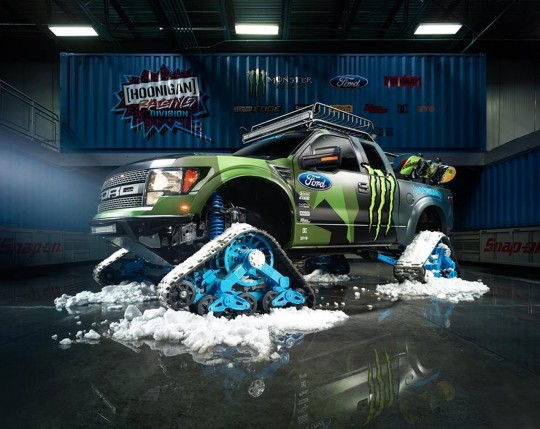 All his efforts would have been futile if it weren’t for the extreme machines Block used during his insane runs. Based mostly on otherwise regular cars and backed by established manufacturers, these conversions also owe their existence to Block and his Hoonigan team.

Back in 2010, Block created the Monster World Rally Team. Sponsored by Monster Energy, the team represented Block’s access to the World Rally Championship. Later on, the name was changed to Hoonigan Racing, but the scope remained the same: race, race, race.

Over the years, with the help of other tuners, Hoonigan had a major hand in building cars for both conventional competitions and for Block’s strange gymkhana ideas. The latest is the Ford F-150 Hoonitruck, one of the cars used in the Gymkhana TEN: Ultimate Tire Slaying Tour released back in December.

But the Hoonitruck is just one of the many machines built by or for Hoonigan and Ken Block. The team’s website counts a total of 20, ranging from snowmobiles to pickup trucks.

Here are the most exciting ten of them, in no particular order.

1974 Ford Bronco – ever since OJ tried to outrun cops at 35 mph (55 km/hour), a speeding Bronco became something of a myth. Then again, Block’s is not your average Bronco: developed by Florida-based NSB Performance, it uses a 5.0-liter V8 good for 435 hp. Bet OJ wishes he drove this one instead. Block's wife doesn't, as she does drive the car, being a gift from Block for their 13th wedding anniversary.

2013 Ford F-150 RaptorTRAX – not exactly a rally car, huh? The M1A1 track system doesn’t exactly make this Ford F-150 Raptor a great contender for gymkhana stunts, either, but it is perfect for shooting a video for Monster Energy at Baldface in Nelson, British Columbia.

1965 Ford Mustang Hoonicorn RTR – the Hoonicorn RTR was the star of Gymkhana SEVEN and later, with some modifications, went out to conquer Pikes Peak in Climbkhana. Regardless of the version, this car is the most powerful ever used by Block, developing 845 in the original build and a whopping 1,400 hp in the Pikes Peak spec.

2014 Ford Fiesta ST HFHV – HFHV stands for something, yes: Hybrid Function Hoon Vehicle. Built by M-Sport and further tweaked by Hoonigan, the car was meant as the perfect machine to use in stage-rally, rallycross, and Gymkhana with an equal amount of success. Powering it is a Ford 2.0-liter EcoBoost engine with 350 hp.
2015 Ford Fiesta ST RX43 – RX43 stands for rallycross #43. It is the designation the guys from M-Sport used for the car they built for Block as his entry in the 2013 Global Rallycross Championship and X Games. But the car became famous as the main 600 horsepower star of the Gymkhana SIX and Gymkhana EIGHT follies.

1986 Ford RS200 – This Ford RS200 is one of the original 200 such cars built to meet the rules of the Group B of the World Rally Championship. In the purest Block style, it is not the same car it was when it rolled off assembly lines: power comes from a 2.1-liter four-cylinder turbocharged engine that develops more than 700 horsepower.

1991 Ford Escort RS Cosworth – affectionately called Cossie, the 1991 Ford Escort RS Cosworth is the definition of a rally car. Using a reworked 2.0-liter turbocharged engine, it was specifically built to be driven by Block in various competitions. The car was completely destroyed in July 2018, during the New England Forest Rally, following a fire caused by the car hitting a very big rock.

2017 SVCOFFROAD Ford F-150 Raptor – meant to fulfill its owner’s desire to roam the “desert playgrounds of southern Utah,” the Ford F-150 Raptor has been tweaked with the help of SVC Offroad and is powered by a 3.5-liter twin-turbo Ecoboost V6 engine that cranks out 550 horsepower.

1977 Ford F-150 Hoonitruck – Built specifically to be part of the lineup of five cars that star in “Ken Block’s biggest gymkhana video ever,” the Hoonitruck is based on a 1977 Ford F-150. Its body was hand-hammered in military – grade aluminum by Detroit Speed, and its heart is a 3.5-liter Ford Performance/Roush Yates EcoBoost V6 capable of developing 914 horsepower.