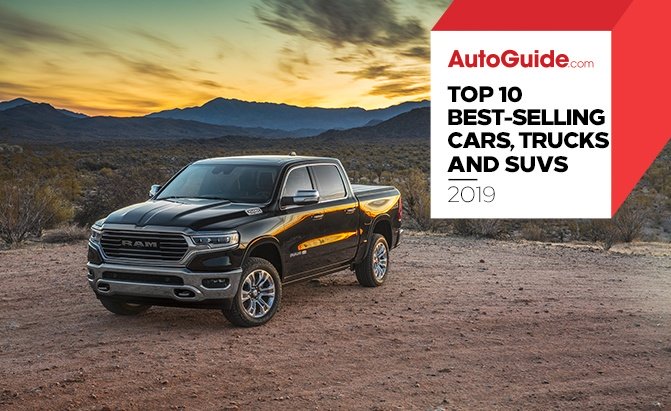 The numbers are in, and they confirm what we already knew: everybody is buying crossovers (and trucks).

America bought 17.1 million vehicles in 2019, according to Edmunds. That was a slight decrease over the previous year, but it was enough to set a record as the fifth consecutive year of sales totalling over 17 million.

There are few surprises in the top 10, with the Ford F-Series pickup retaining its top spot since time immemorial. It sold nearly three times as many models as the 10th place car, the Toyota Corolla. The Corolla is only one of three cars to appear on the list: the rest are all crossovers or pickup trucks.

Another fun fact: the top 10 accounted for around 65 percent of all 2019 car sales on its own. The average entry MSRP is $25,155, with the fifth-place Honda CR-V the closest to that number at $25,050. The cheapest car to get into is the tenth-place Corolla; the most-expensive, the Ram 1500. Three offer two-door models: the Honda Civic, Chevrolet Silverado, and Ford F-Series. Only the Civic and Corolla offer a manual transmission, including the hardcore Civic Type R.

With all that said, here are the best-selling cars, trucks and SUVs of 2019, in ascending order of sales figures.

The humble Corolla just made the cut this year. Unlike most of its traditionally-shaped competition, Toyota’s compact saw a sales increase last year versus 2018. The difference was slight, moving just over 1,000 units more than the previous year. No doubt helping was the Corolla’s newfound sense of fun. It started with the hatchback model, and 2019 saw the roll-out of the sedan, sharing the new TNGA-C platform. The current model ships with either 1.8- or 2.0-liter four cylinders, a choice of six-speed manual or a CVT (now with a physical first gear for better off-the-line performance).

New for North American shoppers is the Corolla hybrid. It’s essentially a Prius without the Prius shell, and for some that’s a pretty powerful proposition. That slug of electric torque makes it surprisingly fleet around city streets too.

The Civic remains a model of consistency for Honda. It hasn’t found itself in the top five for a few years now, but numbers remained consistent in 2019. At 325,650 units sold, the Civic moved only 110 models less than it did in 2018. With a recent facelift across the range it should continue to anchor the sedan side of the Big H’s sales sheets.

Current Civic buyers have myriad options, more so than any of its competitors. There’s the roomy sedan, a sporty-looking coupe, and a five-door hatchback option. The fun and frugal Si, with its turbocharged 1.5-liter, 205 hp engine and six-speed manual is available in both sedan and coupe form. Want the Nürburgring-dominating Civic Type R? That’s manual-only too, and offered only in the hatchback shape.

The Camry remains the best-selling sedan in the 50 states, but that isn’t enough to move it past eighth place on the 2019 charts. Toyota saw a 1.9 percent dip in Camry sales year-on-year, despite a recent refresh.

In its current form the Camry is arguably the most interesting it’s been this millennium. Sticking to the sedan shape only, it marries more engaging styling with a mature drive, smooth-shifting eight-speed transmission and a fuel-efficient 2.5-liter four cylinder. A hybrid model turns it into a genuine fuel-sipper. Toyota added a sporty TRD option for 2020, complete with 301 hp V6. Coming later in the year is an all-wheel drive option, which should increase its appeal in snowier climes.

The Bow Tie brigade’s crossover enjoyed a 4.0 percent sales increase in 2019, an impressive feat for a vehicle with little changes (it was new for 2018). The Equinox leapfrogged the three cars on the list to join its high-riding brethren in the top seven.

With Chevy discontinuing the diesel engine option, the Equinox offered two small-displacement turbo-fours for 2019. The 1.5-liter option offers a perfectly adequate 170 hp and 203 lb-ft, while the larger 2.0-liter brings the power with 252 hp and 260 lb-ft. Power routes to the front or all four wheels via a six-speed auto on the former; the larger engine utilizes a nine-speed ‘box.

Nissan’s double-header entry went into free-fall this year, shipping a sizeable 15 percent less than it did in 2018. That’s all the more surprising considering the Japanese company includes both the original Rogue and the Rogue Sport—known as the Qashqai in all other markets. The two-pronged approach offers five seats, a CVT transmission, and available all-wheel drive in either shape. Pick the Sport and you’ll find a nat-asp 2.0-liter engine underhood putting down 141 hp. The bigger Rogue bumps that to a 2.5-liter, with 170 hp.

The CR-V was Honda’s best-selling vehicle again this year, adding over 5,000 units to its bottom line for its best-ever performance. Over its five generations the CR-V has morphed from its “Comfortable Runabout Vehicle” to a dedicated family hauler.

The 2019 CR-V came with the choice of either a 2.4-liter atmospheric four-cylinder or a 1.5-liter turbo-four. That changes for 2020: out goes the base engine, while a hybrid option, pairing a battery with a 2.0-liter four-cylinder, joins the lineup.

The RAV4 continued to add to its total for 2019, bumping the number up a healthy five percent. That came on the back of a successful new model launch, with a butch exterior and a variety of trim levels for all tastes. Just in case it needed repeating: people want, and get, crossovers.

Even bigger here is the hybrid model’s success: the battery-bundled crossover saw a staggering 92.3 percent sales increase over the 2018 model, shifting 92,525 units. That officially made the RAV4 the best-selling Toyota hybrid of the year too: yes, beating out the Prius. 2020 sees the addition of a TRD Off-Road package for the gasoline model, while a 302 hp plug-in hybrid called Prime will become the second-quickest vehicle in Toyota’s lineup.

Welcome to Truck Town. The top three being trucks is no surprise, but the Silverado grabbing the lowest step on the podium might be. Sales fell two percent year-on-year, though it’s still plenty closer to second place than it is to fourth.

With a wide range of bed, cab, and engine options, the Silverado covers the spread from basic workhorse to luxury cruiser. An available diesel engine in the half-ton model helps at the pumps, too.

If the Rogue is 2019’s biggest loser, Ram’s core model is the winner, surging up 18 percent versus 2018. It’s easy to see why: handsome new looks, plenty of trim options, and—like the Silverado—an available diesel model in the light-duty 1500 range adds up to a hugely appealing package.

What can we say about the F-Series that hasn’t already been said? A slight 1.4 percent decrease wasn’t enough to stop it from claiming the crown once more, again by an absolutely huge margin. Just as shocking: sky still blue, water still wet, etc etc.

The F-150 is just about due for a model change soon, but we wouldn’t expect Ford to drastically change the formula. Why would it? Expect the next model to arrive with a similar lineup of model options, with one big difference: an all-electric version. The Mustang Mach-E will lead the Blue Oval electric charge this decade.

Win a Ford Focus RS with $20,000 in Custom Modifications from Dream Giveaway!

Top 10 Most Dependable Automakers of 2020 According to J.D. Power