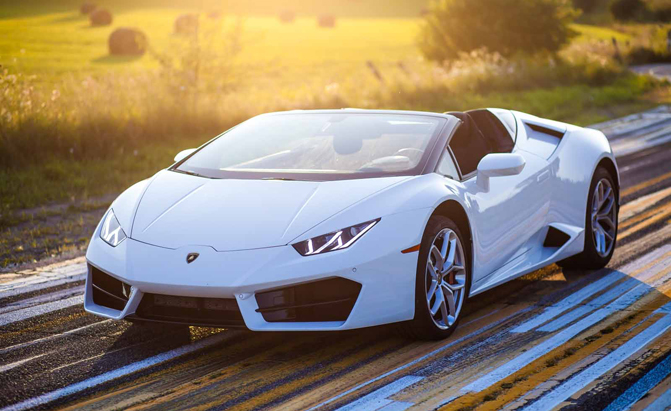 Funny things happen when you drive a Lamborghini for the first time.

Everything you do becomes a dramatic affair and this is even more true with a convertible Lamborghini. If you ever wanted to know what it feels like to be someone famous, driving a Lamborghini droptop might give you proper insight into the instant celebrity experience.

Here’s what my first Lamborghini experience was like, summed up in real questions people asked me while I was driving it.

“What was the biggest surprise?”

The biggest surprise isn’t how fast or loud the Huracan is. Everybody knows Lamborghinis are fast and loud — that’s obvious. This is a car with a 5.2-liter V10 with 580 horsepower and 398 lb-ft of torque that send power to the rear wheels via a snappy seven-speed dual clutch gearbox, so calling it fast and loud would be an understatement. The sprint to 62 mph (100 km/h) takes just 3.6 seconds.

The biggest surprise was two-fold: how stable and confident it felt going speeds over 124 mph (200 km/h) and yet how utterly civilized it felt at city driving speeds. When hitting 125 mph, the most remarkable thing was that there was no sensation of speed — the Huracan just felt so stable that you would have no idea how fast you were going if you weren’t getting tunnel vision.

But the car was also surprisingly docile and civilized at low speeds. It never felt like it was going to kill you and wasn’t particularly angry in bumper-to-bumper traffic or crawling around in the city. I had always assumed Lamborghinis would be a handful to drive, but this just wasn’t the case. The Huracan RWD Spyder was unexpectedly undemanding to drive.

“Why do you look so stressed out?”

The Lamborghini was undemanding in most circumstances, that is. Driving a Lamborghini can be a really stressful experience, especially if you’re using it as a daily driver. Realistically, anyone who owns this car would have other daily beaters at their disposal, but I drove this car everywhere for four days straight. Yes, driving a Lamborghini is more fun than an all-expenses-paid trip to Disneyland, but it’s also equally stressful at times. If you had a suitcase filled with a quarter-million dollars in cash, I’m sure you’d feel the same way.

I live in the city, which means there are a lot of broken roads, streetcar tracks, ramps, parking garages, speed bumps, and tiny parking spaces to deal with, which isn’t ideal because the Huracan sits so low to the ground. Although the Huracan has a front-end lift that lifts the nose by about an inch, ramps that you never even noticed before all of a sudden become your mortal enemies. Taken on an angle and done embarrassingly slowly, I avoided scratching the bottom of the bumper on any ramps, but I never got over the feeling of being terrified by driveways and the like. I carefully studied the advantages of both concrete and asphalt driveways.

Parking is also stressful. There is a backup camera, but the screen seems to be no bigger than a playing card and you’re blind to basically anything behind your shoulders. Not to mention that when you park, EVERYONE is watching you, so you feel a lot of pressure not to mess it up.

Nothing is rewarding if it’s too easy, however, and this, in a way, is what helps makes the Huracan so fun.

That’s funny because my commute to work is about seven minutes. I also drove it to the pet store to buy kitty litter and kibbles, to the Walmart to buy car cleaning supplies, and then drove it two hours one way to get pizza, because why not? The front trunk (frunk) would normally be able to carry all the groceries I’d buy, but it was filled to the brim with a bulky car cover so we had to be very careful about what I bought when both seats were full. Takeout pizza? We had to ask for a smaller box or it would have to rest on my passenger’s lap the whole ride home.

It’s strange to give such a special car such unremarkable tasks as buying kitty litter and taking it to Walmart, but you find yourself making any excuse to drive it. It would be a disservice not to drive it everywhere you possibly could.

“Can you do it again? My Snapchat wasn’t ready!”

If you’re not comfortable getting your photo taken or revving the engine at a stoplight for people who ask, a Lamborghini isn’t for you. And because it’s a convertible, you don’t get the extra privacy of a closed top, so your face is going to be all over people’s Snapchats whether you like it or not.

Waiting at a stoplight in an underpass, a fellow in a Jaguar revved his tuned V8 next to me and I took that as an invitation to one-up him. I happily obliged. When I was done, a driver behind me asked for me to do it again because his Snapchat wasn’t ready. This happened a handful of times in my short stint with the Huracan.

If you want some insight into what it’s like to be a celebrity, this might be the best indicator because the paparazzi are everywhere. The bright side is that this is the kind of car that makes people’s day. During my two-hour pizza run, a young teenager was freaking out because she had never been this close to a Lamborghini before and she was just so happy there was one in her small town. Of course, I let her sit in the driver’s seat and I took her photo, and she was just beaming. Moments like that make driving a Lamborghini even more special.

“How do you put it into drive?”

My dad asked me this question after getting into the driver seat and attempting to drive it. His attempt was thwarted because he couldn’t figure out how to get it out of park. It’s an exotic car, so of course, everything about it will be somewhat unusual. There’s no traditional gear selector — instead, there are buttons you push to reverse or park it. But having a button to get it into drive or neutral would be too ordinary, so to put the Huracan RWD Spyder into drive, you flip the right paddle shifter once and to put it into neutral, you bring both paddle shifters forward once. In addition to the jet fighter-inspired toggle switches and cradled ignition button, these unique details make every interaction with the Lamborghini a special one.

“Are you teaching her how to drive it?”

This was by far the most annoying thing that happened to me during my few days with the Huracan Spyder. With me in the driver seat and my boyfriend in the passenger seat, some clearly dim passers-by looked right past me and asked my boyfriend if he was teaching me how to drive it, because, you know, a lady could never be able to drive one on her own. I should just go back to my kitchen…

Driving the Lamborghini Huracan RWD Spyder made me feel like the luckiest person in the world and I was extremely fortunate to get the instant celebrity experience. It also made me realize that I am far too introverted to deal with all the people who asked me all the above questions. If you drive a Lamborghini, EVERYONE wants to talk to you, and the interest is even more intense with droptops, so Lamborghini drivers have to have loud and outward personalities, just like the cars themselves.