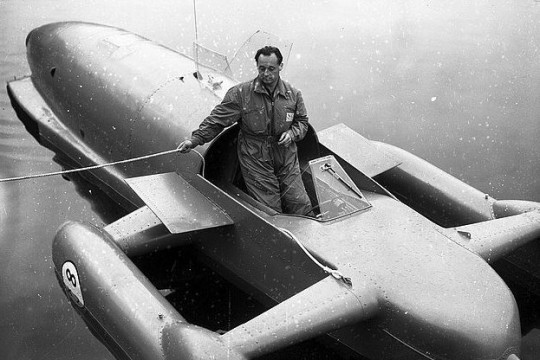 The machine, first shown in 1954, was built by and for Donald Campbell, a speedster by trade and the only person to have ever set both world land and water speed records in the same year (1964).

Bluebird was meant to help set a new top speed on the water. And it did more than that. Throughout about ten years, Campbell drove the K7 to seven world water speed records. The eight attempt was a tragic one.THE SPEEDSTER

Born in 1921 in Kingston upon Thames in Surrey, Donald Campbell came from a family of speedsters. His father, Malcolm, was among the first such daredevils, having set 13 world speed records in the 1920s and 1930s in both cars and boats.

After finishing school, Campbell was drafted to serve in the Royal Air Force, but because of a medical condition he had as a child, he didn’t serve. Instead, he ended up working as a maintenance engineer for a West Thurrock company called Briggs Motor Bodies.

He failed, but the senior’s record was beaten later that year by American Stanley Sayres, who achieved a top speed of 160 mph (257 km/h). This made Campbell even more determined, and he set out to make some modifications to the K4, including moving one of the propellers to sit above water and adding a second cockpit.

The Brit managed to beat Sayres’s record, but at a huge cost. The K4 was wrecked at Coniston Water, Lancashire, after reaching a top speed of 170 km/h (105 mph).

After losing the K4, Campbell began working on its successor. To be called Bluebird K7, the machine was to be the world’s first successful jet engined hydroplane.BLUEBIRD K7

The name Bluebird – sometimes spelled Blue Bird – encompassed not only water vehicles but land ones as well. The name was first used by Donald’s father to depict them both. In all, six cars and four hydroplanes wore the name over the decades.

The Bluebird K7 was a three-point hydroplane built on a steel framed and with an aluminum body painted blue. Powering it was a Metropolitan-Vickers Beryl axial-flow turbojet engine that generated 3500 pound-force (16 kN) of thrust.

The jet engine on the machine was capable of propelling it on top of the water at speeds of 250 miles per hour (400 km/h).

Because of the arrangement of the three planing points – two forward and one aft – the K7 quickly received the nickname blue lobster.

There was another record attempt made by Campbell, following a major overhaul of the K7, in 1967. He was targeting a major leap from his previous figure, 300 mph (480 km/h).

To achieve it, he managed to get the Ministry of Defense to lend him a Bristol Siddeley Orpheus engine capable of generating 4,500 pound-force (20 kN). The engine used is part of the family deployed on the Harrier fighter jets.

Significantly more powerful than the one used until then, the unit was also lighter, making Campbell confident the target record is within reach.

He returned to Coniston for the attempt, and on January 4, 1967, he set off. During the initial run, heading north to south over the lake, the Bluebird K7 reached a top speed of 311 mph (501 km/h).

Usually, after a run, water racers wait a while until the wash from the previous run subsides, or to refuel, and so was the plan this time. Only than Campbell decided not to wait and set off on his second run.

The Bluebird’s performances were outstanding, the hydroplane topping at 320 mph (510 km/h), but not for the full length of the measured kilometer. But once this threshold was reached, it began to break apart and became airborne.

The K7 skipped on the water until it became vertical and took to the air, landing violently nose-first into the water.

The force of the impact killed Campbell instantly and sent the machine to the bottom of the lake. Both the wreckage and his body were not to be retrieved until 2001. Campbell’s remains were buried in Coniston cemetery.

In the time since his death, Campbell lost the record in favor of other daredevils. Currently, it sits in the hands of Australian Ken Warby, who used the Spirit of Australia racer to top at 511 km/h (318 mph) in 1978.

Is hoped the Bluebird K7 will see action once again in about a year’s time, as the reconstruction process is nearly over. As per the claims of the hydroplane’s builders, the new K7 is 98 percent the old one, making for a triumphant return of the original Bluebird K7.