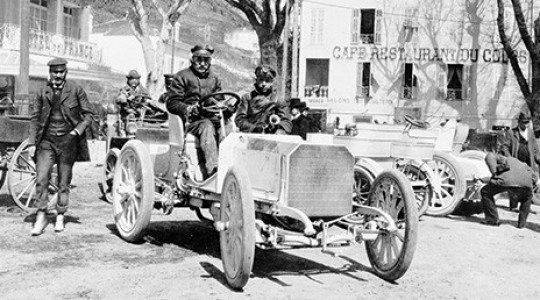 The name has been chose in honor of Emil Jellinek, Mercedes-Benz’s first customer, it’s first racing team owner, member of the board, investor and, most importantly, the man behind a name that has come over the years to be associated with premium cars.

Born in Leipzig, Germany, in 1853, Jellinek is described by Mercedes as a kid who “gave his parents little joy during his school years.” Before the turn of the century, going to school was a prerequisite for social and business success. But it was not the only way to achieve greatness, as it will soon became apparent to Jellinek.

In Jellinek’s case, school didn’t stick, despite efforts made by his parents to provide home schooling of some sorts. Emil Jellinek was a more hands-on-approach kind of a kid, dropping out of several schools during his childhood and teens.

Giving up on efforts to make school interesting for Emil, his parents found him a job as a clerk for the North-West Rotkosteletz railway company.

He worked for the company only for two years. When he was 19, his father, a Czech-Hungarian rabbi and intellectual, managed to secure, through his relations, a job for Emil as a diplomat of the Austro-Hungarian Consul to Tangiers, Morocco.

Through the various contacts Jellinek made during his years as a diplomat, he soon established himself as a tobacco trader and a business man. He soon grew rich enough to move to Nice.A PASSION FOR SELF-PROPELLED VEHICLES

By the time he arrived in France, Jellinek and his inclination towards engineering found fertile ground in the nascent automotive industry. The now businessman’s first vehicle was a De Dion-Bouton, a tricycle powered by a one-cylinder engine. This was soon followed by a three-wheeled Léon-Bollée Voiturette and a four-seater Benz carriage.

But one carmaker in particular drew Jellinek’s attention: Daimler-Motoren-Gesellschaft (DMG). He was so intrigued by what the Germans were doing that it only took seeing an ad in an weekly magazine to send him on a trip to Cannstatt in Stuttgart for a first-hand look at what was going on there.

Having met with the two founders of the company, Gottlieb Daimler and Wilhelm Maybach, Jellinek bought his first Daimler car, a Phoenix Double-Phaeton. It was 1897 when he took delivery of the 6 hp belt-driven model with a 2-cylinder engine and a top speed of up to 24 km/h.

Knowing cars could do better than that, Jellinek asked the two Germans for a faster, 40 km/h model. Daimler and Maybach complied and delivered two new Phoenix cars, powered by a front-mounted 8 hp unit. These cars became the first road-going vehicles to feature a four-cylinder engine.CAR DEALER
Seeing the products and how they were made, Jellinek becomes what may be considered the world’s first true car dealer. He begins advertising Daimler cars to his wealthy friends and acquaintances. He becomes so good at it that in 1898 he sells six cars. That was huge for the time, so he had the courage to ask be named Daimler’s main distributor.

Apart from selling cars, Jellinek also tried to get involved in the manufacturing process, giving Daimler and Maybach new engineering ideas to improve their products. That included his participation in a new form of engine that was to fitted on a car with a special name. MERCEDES

Car racing was the best way car producers made themselves known at the turn of the century. From time to time, DMG did the same, but with little success.

As a means to further advertise the cars he sold, starting 1899 Jellinek entered a series of racing events across France. Just like in modern days, racing teams usually used various names. Jellinek chose for the cars racing for him the name Mercedes, after the daughter he had with his first wife, Rachel Goggmann Cenrobert.

The name had a special ring to it, so it stuck in the collective mind.

In 1900 Jellinek promised Maybach a huge sum of money for the development of a sports car capable of winning races. Maybach came up with a 35 horsepower machine, of which Jellinek ordered 36 units for 550,000 Marks ($3.7 million in today’s money).

Being pretty much his idea, Jellinek asked that the new model, a 35 horsepower monster, be called Mercedes, just as his racing crew and daugther.

Soon, Jellinek, one of the most important figures in the history of what is today Mercedes-Benz gained a seat as a member of DMG's board and exclusive dealership rights for France, Austria, Hungary, Belgium and United States.

The models to be sold from now on were to be called Daimler-Mercedes.