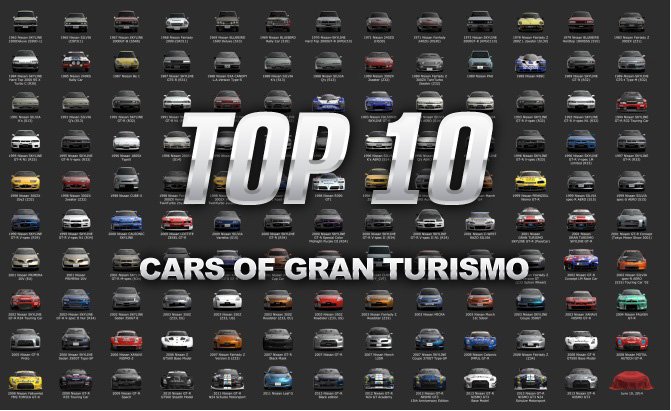 Spanning over two decades and including thousands of cars, the Gran Turismo franchise is a juggernaut of the gaming world.

It’s a series millions of gamers have enjoyed over the years, including this writer. Since its inception way back in 1997, GT has struck that happy balance between accessibility and in-depth simulation. It’s a recipe for success, with over 80 million copies of the franchise sold.

The first game in the franchise included well over 100 cars. For many in North America it was a whole new world: the mighty GT-R was an unknown on our shores, and Subaru credits the game with its eventual decision to bring the WRX here. And who can forget TVR?

In 2017 developer Polyphony Digital released the latest iteration of the game, . As the name implies, this is a different sort of experience, zeroing in on the rising esports scene. No less than the world’s governing motorsport body, the Fédération Internationale de l’Automobile (FIA), sanctions the globe-trotting spectacle. The fastest players from all over the world compete in locations like NYC and Monaco.

Nonetheless, the cars remain the stars in . A steady stream of post-release content drops has expanded the lineup, so we thought it was high time to narrow down our franchise-wide favorites.

With thousands of cars to choose from, everybody’s lists could look different. What does your personal top 10 look like? Let us know in the comments.

“Wait,” we hear you say through the magic of the internet, “this list kicks off with a gold minivan?!” Yes. That’s because this isn’t the clapped-out woodie-panelled Voyager of your childhood. In the heady days of the ’90s, Renault wanted to celebrate the 10th anniversary of the Espace. The French company decided the best way to do it was to give its people-mover a heart transplant, fitting a 3.5-liter Formula One V10 right in the middle. Oh, and turning up the wick from 700hp to 820hp. As one does.

The swap—plus all the necessary upgrades elsewhere—resulted in a demented monster of a van that could give up to four people a slightly higher-riding F1 experience. It appeared just once in Gran Turismo, in 1999’s , but we hold out hope of its return. Leave it to the French to make a minivan cool.

It’s okay if you’ve forgotten about the Del Sol. Most people have.

The affordable sports coupe market was actually still a thing in the ’90s, and the Del Sol was Honda’s Civic-based entry into the fray. More of a cruiser than the CR-X that came before it (despite sharing that name in its home market), the Del Sol nonetheless featured a rev-happy little four-cylinder and Honda’s snick-snick manual shifter. The problem, at least for some people, was that its design hinted at a mid-engine layout like the contemporary Toyota MR2.

So Gran Turismo fixed that. The crew crammed a massively upgraded engine behind the digital driver, which spit its 560-plus horsepower to the rear wheels. The Del Sol grew a widebody kit and a suitably big wing to keep it planted around Trial Mountain with all that power. Two decades since its last appearance we still want to recreate it as a project car.

Anyone who’s ever played Gran Turismo knows this car. In , it was dominant and in it’s still a fan favorite. Need to pass a difficult rally stage? Grab the Escudo!

With two engines and all-wheel drive, the Escudo Pikes Peak Version was Nobuhiro “Monster” Tajima’s race car that obliterated the Pikes Peak International Hill Climb in the mid-1990s. It may not have been Monster’s most successful Pikes Peak car, but it is his most famous.

In fact, it’s safe to say the inclusion of the Escudo Pikes Peak in the Gran Turismo franchise helped introduce the Pikes Peak event and Monster himself to a whole new generation of fans around the world.

Mike had the Nissan R34 on the original version of this list. It’s hard to argue with the inclusion: as we mentioned up top, Gran Turismo is largely responsible for the GT-R’s reputation on this side of the Pacific. But the Nismo 400R is the ultimate iteration of the R32–R34 Skylines.

Nissan’s tuning division went to town on the R33 with this. A bored and stroked version of Godzilla’s famous RB26 engine pumped out 400hp—hence the name—and the body got choice upgrades out of carbon fiber. The 400R wore gorgeous three-piece Nismo LM-GT1s too.

Okay, so it was fast, but why does it hold a special place in GT history? It’s because the 400R was one of the hardest cars to own in the original . The only way you’d find it in your garage was earning gold on the top license in the game. This meant mastering most of the tracks, and running a fast lap with pretty much zero error. If someone counted the Nismo amongst their digital collection, you knew they were quick.

Yeah, we went there. The Motor Wagen makes it onto both this  the worst cars of Gran Turismo list. Why? Because if you treat Gran Turismo as the digital, interactive encyclopedia it so very badly wants you to, then this is a landmark. This is Genesis (no, not that Genesis). This is Star Wars: A New Hope.

Sure, it’s utterly useless to race. It turns in lap times comparable to trans-Atlantic shipping routes. If faced with any sort of incline, especially some of the ones at the Nürburgring Nordschleife, it won’t even complete a lap at all.

None of that matters. What matters is that the experience is preserved in digital form. It’s not a stretch to say most of us will never get to experience the first car in the real world, so this is a welcome alternative.

No, your eyes do not deceive you. This is a rally version of the current (pre-facelift) Mustang. It looks awesome, right?

One of the many benefits of the digital realm is that it isn’t tethered to things like business cases. Ford’s beancounters are unlikely to green-light a purpose-built rally car, but that’s not a concern for Polyphony Digital.

Gr.B is the rally class in , harking back to the wild ’80s era of the same name. It houses Subarus and Mitsubishis, but also counts cars like the current GT-R and NSX amongst the mix. We picked the Mustang because those cars already come from the factory with four-wheel drive, making the pony car that much more unlikely of a base.

This one does send power to all four corners, of course. It does so with a GT350-beating 549hp, and gets a wildly-flared bodykit to boot. Yes please.

When Gran Turismo 4 came out for PlayStation 2, it included the odd looking, built-in-someone’s-backyard-esque Chaparral 2J racecar. It was one of the most technologically advanced, innovative race cars of its era and Gran Turismo gave it a who new generation of fans.

Its dominance on the racetrack (when not suffering from a plethora of mechanical failures) was immense and this translated to the game as well. In an unfortunate twist of uber-realism, the Chaparral 2J was banned from a lot of online racing series, just like it was banned from competition in real life.

Still, in career mode, if there was an advanced race you were having trouble to beat, the 2J was often the solution.

did a lot of things new for the franchise. It was the first title on the PlayStation 2, bringing with it a huge bump in graphics quality. It introduced rainy weather too. The shock came later in the game, when players could uncover full-blown Formula One cars in their decidedly non-F1 game.

The original version of this list included every iteration of these mean machines. We’ve since narrowed it down to one: the F688/S (or Polyphony 002 to players in Europe). The name is the clue: F for Formula; 6 for the number of cylinders (turbo V6); 88 for the year; and S for the driver, in this case Ayrton Senna. This sneaky approach let players access some of the best F1 cars from the late turbo and early V10 eras. In this case it was Senna’s iconic McLaren MP4/4, which he took to his very first driver’s championship. Way cool.

Way before we made fun of the Ferrari The Ferrari, French curio maker Citroën beat everyone to the punch with this.

The GT—as we’ll simply call it for the rest of the article—can be considered a precursor to the ongoing Vision Gran Turismo project. Kicking off in 2013, Vision GT allows manufacturers to design cars specifically for the franchise, with no worry given to pesky things like reality. Some later projects have been complete flights of fancy, powered by lasers or technology that hasn’t even been invented yet, but the GT was comparably down-to-earth. It wrapped a show-stopping exterior around a hydrogen fuel-cell powertrain, which sent power to electric motors at each corner. It produced a staggering 770hp in-game when it arrived on the scene in .

Oh, and the torque. We believe the technical measurement is “gobs and gobs”—the actual number is 1,840 lb-ft. The GT sounded like a futuristic jet and took off like one too. That it had an out-there interior with plenty of cooper and a heads-up display only added to the sensation. The GT was early proof that electric cars needn’t be boring.

This is the latest in a long-term partnership between Red Bull and Polyphony Digital. The original X2010 showed up in , a wild what-if from the mind of famed F1 designer Adrian Newey. Freed from the bonds of reality, the X2010 included a mid-mounted V6 pumping out four digits’ worth of power, ultra-optimized aerodynamics, and a fan to suck it even closer to terra firma. Driving it in the real world would require a special anti-g suit.

The 2019 evolution arrived in  after multiple appearances in the game’s FIA-sanctioned esport events. Gone is the turbo-six, replaced by an atmospheric V12. The fan is also deleted, and the aero design simplified. It’s still silly fast, but now drives like some sort of prototype/F1 hybrid instead of a twitchy hover car. So that’s good.

Don’t expect to parade around in the cool national liveries above, however. That’s reserved for the pros. Better start practicing, then!