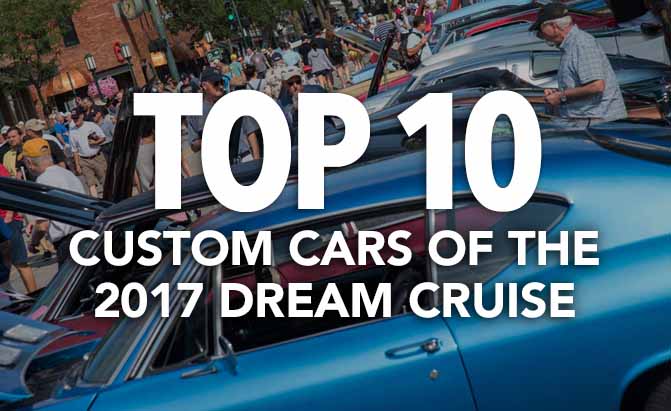 During the halcyon days of Detroit muscle from the late 1950s through the early ‘70s, historic Woodward Avenue was ground zero.

Then and now, there’s really no better place to go for a cruise than this 20-odd-mile-long multi-lane boulevard that stretches from the heart of Motown up to Pontiac, Michigan.

Recreating the magic from decades past, the Woodward Dream Cruise is like a massive time machine, one that that transports participants and spectators alike back to the middle of the previous century. You’ll see, hear and even smell living history as vintage vehicles of every stripe roll along the road.

SEE ALSO: We Get a Rare Look Inside the GM Heritage Center

Of course, high-performance models are a staple of this epic event, street rods, and customs, and muscle cars, oh my! Here are some of the hottest custom vehicles we spotted out on Woodward.

This old-school Vee-Dub has been turned into a little off-road monster. With meaty rear tires, a massively lifted suspension and built-up engine, it probably goes like stink whether you’re out on the trail or cruising around town. That vertical, center-mounted exhaust pipe is oh-so-cool! Ferdinand Porsche probably never imagined his affordable, mass-market creation would ever be transformed into something like this, though we suspect he’d be proud nonetheless.

Someone has taken a fifth-generation Camaro and built themselves a modern-day Pontiac GTO and you know what, we’re OK with that because every kind of vehicle is welcome at the Dream Cruise. This custom’s covered headlamps, split grille and two-tone paint job are classically tasteful, though the same can’t necessarily be said of those hood scoops. #TooMuch

We have no idea exactly what’s under the hood of this ’68 AMC Javelin (possibly a 343 V8 as indicated on the rear fender), but it sure looks good dressed in red, white and blue custom car wraps, a paint job that was absolutely impeccable. Girthy side pipes and a bulging hood indicate there’s plenty of engine crammed in between those front fenders.

This old Ford pickup ain’t rusty, it’s got patina! The body appears unrestored, but the bits beneath that shell are likely pretty serious. Lowered nearly to the point of scraping with big ol’ wheels, this truck’s probably fast as hell, it looks great as well.

Its top has been chopped, body reworked and powertrain undoubtedly replaced, but we still love this ’41 Chevy coupe. Sure, it would look more at home on the dragstrip than on a public street, but nobody here’s complaining. Even the paint job gives it a jaunty look. Wonder what she’ll do in the quarter mile?

How ‘bout this ’32 Ford roadster, the quintessential hot rod? This one has been extensively modified, featuring a tubular front axle, telescopic shock absorbers and what appears to be a chopped windshield. Oh yeah, and we’re pretty sure it didn’t leave the factory with a small-block Chevy V8 under the hood, but who’s counting?

Everybody should love panel trucks! Think of them as crossovers grandma and grandpa would have driven in their youth. This Chevrolet example is pretty slick, with glimmering silver paint, red-hot flames and a neatly louvered hood. Subtle it is not.

We’re not exactly sure what we’re looking at here. This could be another T-bucket, there are definitely some Ford chassis components included, like that solid front axle and transverse leaf spring, but other than these easily identified telltales, we’re at a loss. What do you think this is?

You’ve gotta love this classic 1950s Chevy, which features a dressed-up inline-six. To its owner, THANK YOU for bucking current trends and NOT putting another small-block V8 under there. This car has been immaculately built and looks sharp, especially under hood with that dual-carburetor intake manifold and finned Offenhauser valve cover. Yummy!

Now this is more like it! Unlike the No. 5 selection above, this pre-war Ford features a proper powerplant under hood, one developed under the guidance of ol’ Henry himself. Most likely a 1933 (the slightly concave grille is an easy way to distinguish them from ‘34s), this five-window coupe features a flathead V8, one that’s no doubt more powerful than the engine it left the factory with. Made for Woodward, it appears to feature a nasty supercharger on top and breath through a pair of Stromberg mixers.