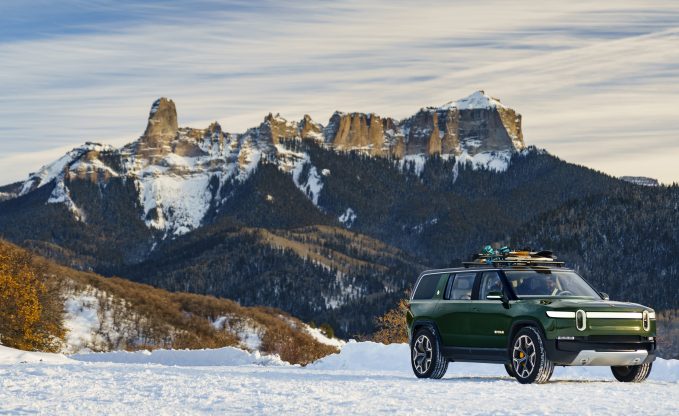 The future is electric, that is a fact. Here is another one, SUVs are the present and will not fall out of favor any time soon. So developing electric SUVs would be the right way forward so you appeal to both crowds correct? Well, manufacturers seem to agree on that too. That is why in the months to come we will probably see a slew of new electric SUVs arrive on the scene. Some might fly under the radar while some will certainly make a big splash and even more if you decide to get a dash cam installation. We have compiled a short list of the Top 5 electric SUVs to look out for in 2021. Which one are you looking forward to?

Despite the flack from the gearhead community at large, we think to leverage the Mustang name for an electric vehicle is quite smart. Yes, it is blasphemy in some aspects but if it helps Ford establish itself as in the electric car space while being kind to the environment, it is a win-win situation. The Mustang Mach-E was first revealed late last year and will likely hit the showroom floor before the end of this year.

The overall design echoes that of the muscle car with the pony taking center stage on the grille planked by sleek LED headlamps. The four doors and high roofline do make you question the ‘Mustang’ part but the triple tail lamps are quintessentially Mustang. Prices will start from $43,895 for the Select trim and will top out at $60,500 for the GT trim. Other trims available are Premium Edition and California Route 1. The Mustang Mach E will come with two variations of its powertrain, Standard Range with 230 miles of range on a full charge and Extended Range with 300 miles. But these figures are for RWD only. Opting for AWD will reduce the range by 30 miles. In addition, output figures will vary according to the trim.

Select will make 255 hp while the Premium will be available with 255 hp and 282 hp (ER setup) opting for the AWD Premium Edition will further bump the power up to 333 hp. California Route 1 will get the RWD ER setup only meaning 282 hp with a 300 mile range. The range-topping GT on the other hand will 459 hp and 612 lb-ft of torque.

Ford also introduced that the Mach E will also come with its new Active Drive Assist system that will allow hands-free driving on US and Canadian highways.

Audi is at the forefront of electrification at least in the luxury car segment. After the e-tron SUV, the German Automaker has set its sights on a more affordable and mass-market e-tron SUV. The one leading the charge will be the Q4 e-tron. It is set to go on sale in early 2021 and will come with an 82 kWh battery pack. Range at full charge will stand at 280 miles with the dual-motor setup and 311 miles with a single motor setup according to European WLTP testing cycle.

The electric powertrain will produce 300 hp of max power which will enable the Q4 to hit 60 mph from a standstill in just 6.3 seconds. Inside, it will feature the 12.3-inch virtual cockpit which will likely be a standard offering, a heads-up-display though might be optional. As for infotainment, Audi’s MMI system will take center-stage on the dash and will be a touchscreen unit. It could also come with a second screen on the dash which can be used for climate controls and frequently used features. It could also double up as a writing pad with handwriting recognition.

Loading …In terms of safety expect adaptive cruise control, AEB and blind-spot detection to be offered as standard along with lane-keeping assist. Prices could start from $47,000 which will make it the most affordable all-electric Audi. And as we mentioned before, it will likely go on sale by early next year.

The name of Volkswagen’s all-electric SUV option in the North American market was the subject of a long and tedious debate. But the German automaker put all speculations to rest by announcing that the ID.4 will be the brand’s first all-electric crossover in the US market. The ID.4 is based on the ID.Crozz concept and will probably go on sale in early 2021. It is not only VW’s first electric crossover for the US market but it will also be the first car to debut under the ID sub-brand.

Loading …VW claims that it will have a range of 310 miles on a full charge and will be available with both single and dual motor setups. The single motor setup will make 201 hp and will be RWD only while the dual-motor setup could add 101 hp to the front for a more sprightly drive. The cabin will likely feature VW’s digital cockpit with a touchscreen infotainment system using voice recognition and maybe gesture control for most settings. When launched, it will face off against the likes of the Kia Niro EV and the Hyundai Kona Electric.

The new Nissan Ariya is the brand’s first-ever all-electric SUV and frankly, It is a surprise that Nissan didn’t develop one sooner. They had the technology. Cutting right to the chase, the Ariya will go sale by mid-2021, in Japan, and by late 2021 in the US market, hopefully. Prices will probably start from $40,000 and it will rival the Tesla Model Y

Loading …In terms of size at 182.9 inches in length it is almost identical to the recently revealed 2021 Nissan Rogue but that’s where the similarities end. It is considerably lower and wider than the Rogue and quite honestly, looks a lot better too. Nissan claims that the Ariya will do 300 miles on a full charge but that will be possible with the optional 90kWh battery pack. The standard battery pack will be the 65kWh unit from the Leaf Plus. The Ariya will offer FWD as standard but Nissan will offer its new e-4ORCE AWD system as well. The e-4ORCE system will employ an electric motor at each end for better driving dynamics and of course, more power for sprightly driving.

The single motor setup will produce 214 hp of max power and 221 lb-ft of peak torque while the dual-motor setup will dish out 389 hp and 443 lb-ft. There is no middle ground. Inside, Nissan will offer its Zero Gravity seats as standard along with a minimalistic dashboard with a handful of controls with haptic feedback. It will also feature an ultra-wide dual-screen setup that will double up as infotainment screen and the instrument panel. The whole dash looks rather elegant and appealing. It will also feature an e-pedal which is essentially a single pedal system also found on the Chevrolet Bolt.

Though Rivian’s R1T is the launchpad for the company, its derivative, the R1S is probably more unique than the pick-up truck. The R1S will be based on the R1T pickup and is a seven-seater American-style boxy SUV aimed squarely at the Tesla Model X, the only other three-row SUV in the all-electric space. It is worth mentioning here that the R1S will also be cheaper than the Tesla and will likely cost around $65,000 after tax credits and will go on sale in early 2021.

Like the pick-up, the R1S too will come in three battery sizes, 105 kWh, 135 kWh, and 180 kWh. Needless to say, the 180 kWh battery pack will also offer the longest range of 410 miles. Although Rivian hasn’t officially revealed power figures, the company states that the R1S will make ‘up to 750 hp’ of max power and will crack the 0-60 mph sprint in three seconds flat. It will also feature a quad-motor system  meaning a motor at each wheel of the SUV and AWD as standard. Rivian also claims towing capacity of 7,700 lbs and a wading depth of over three feet.

The cabin will be minimalistic with digital instrumentation, a touchscreen infotainment system, and touch controls for most features and settings. The infotainment should feature wireless Apple CarPlay and Android Auto as standard along with Wi-Fi capability