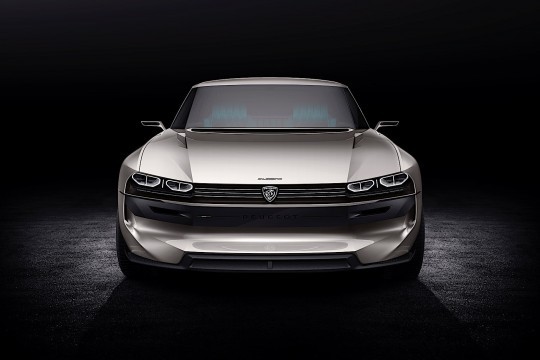 But in 2018 we've also had a lot of concept cars being shown, some of which will turn into production versions as soon as 2019, some so insane it's likely we'll never actually get to see them on the road.

This week, we thought to make a trip back to the start of the year and work our way back to present day, going through all the concept presented since and choosing the top ten we find to be the most exciting. Peugeot e-legend

Back in the 1960s, French carmaker Peugeot was manufacturing the 504 Coupe, a rear-wheel drive car that soon became one of the company's hit products of the time.

The concept is, of course, electric, and uses 100 kW batteries to reach a maximum range of 600 km (370 miles). Electric motors push the car forward, having a combined output of 456 hp and 800 Nm of torque.

A production version of the e-legend has not yet been confirmed. Mercedes Vision EQ Silver Arrow

Mercedes' EQ brand is the future of motoring coming from one of the world's premiere carmakers. It will comprise all of the company's electric vehicles and will be upon us as soon as next year.

Back at the beginning of motorsports, in the 1930s, Mercedes was racing at events across Europe with cars called Silver Arrows. Since the three-pointed star brand is one that values its past, a concept car that mixes past and future was shown this year.

Called Mercedes Vision EQ Silver Arrow, the concept made its appearance at the Monterey Car Week with an 80-kWh battery and 738 horsepower electric motors instead of the supercharged internal combustion engine.

No production version of the car is planned at the moment.Audi PB18 e-tron

Just as Mercedes, Audi too is planning an electric brand of cars for next year. Already tested in various configurations in the past decade, the e-tron brand truly came to life this year, with the electric SUV, but will really launch in the coming years, with the EVs based on Volkswagen's MEB platform.

In anticipation of that moment, Audi showed at the Pebble Beach show it's first fully electric supercar, the PB18 e-tron.

No plans for a production run were made public.Genesis Essentia

No confirmation was made about a production version of the Essentia. BMW Vision iNEXT

BMW too will fully join the electric car race next year, having already entered the market a while back with the i family of cars. For BMW, the real expansion in the EV world will begin in 2021, but that doesn't mean we can't get to see a glimpse of the future right now.

In September, BMW unveiled the Vision iNext, a car that is supposed to be the embodiment of both the electric and autonomous aspirations of the Bavarians. Infiniti Prototype 10

Infiniti has been a very active bee in the concept car segment this year. Several concepts have been shown, and a few more will do so starting next year, with the Detroit Auto Show.

The most exciting of Infiniti's concepts this year is the Prototype 10, a creation of the company's new design chief, Karim Habib.

A continuation of the Prototype 9 of earlier years, the 10 came with no info about powertrain and capabilities, and no production confirmation.

Still, it was one of the most exciting concepts to look at this year. Pininfarina Hybrid Kinetic GT

In the business of designing car concepts for years, the Italians from Pininfarina have been tapped this year by several car companies to draw the lines of new cars.

For Chinese company Hybrid Kinetic, Pininfarina designed the GT, shown at the Geneva Motor Show. Comprising an undisclosed number of batteries, four electric motors and a two-speed transmission, the concept develops 1,000 horsepower and has a range of 1,000 km (621 miles).

It is unlikely the car will actually make it into production.DS X E-Tense

Asymmetry was the name of the game this year for the French at DS, the ones that probably showed the craziest concept of the year: the DS X E-Tense.

The machine is designed to have the seating positions of the two people it can carry are offset from one another. The car is autonomous and electric and is powered by two electric motors that develop 540 horsepower for road use or 1,360 horsepower for track purposes.

Of the bunch of concepts in this piece, the X E-Tense is the only one that was not actually built and was shown just like a rendering. No production version is coming.Jeep Easter Safari Concepts

Off-road lovers had few reasons to rejoice when it comes to concept cars this year, as very few designs made their way onto the public scene. But this past Easter, Jeep showed not one, but seven real concepts, saving face for the segment.

The seven cars are the Jeepster, B-Ute, J-Wagon, 4Speed, Sandstorm, Nacho and Wagoneer Roadtrip and saw action during the 52nd edition of the Easter Jeep Safari.

For now, the concepts are only one-offs, but with Jeep one never knows.Lamborghini Terzo Millennio

Lamborghini is not a carmaker usually in the market of designing concept cars. Yet, this year it presented at the Geneva Motors Show the Terzo Millennio, a supposedly electric supercar built together with the Massachusetts Institute of Technology (MIT).

Unlike other concepts shown this year, the Terzo Millennio doesn't use a battery but is in itself a battery. Visually, the concept is said to preview the next generation Aventador.