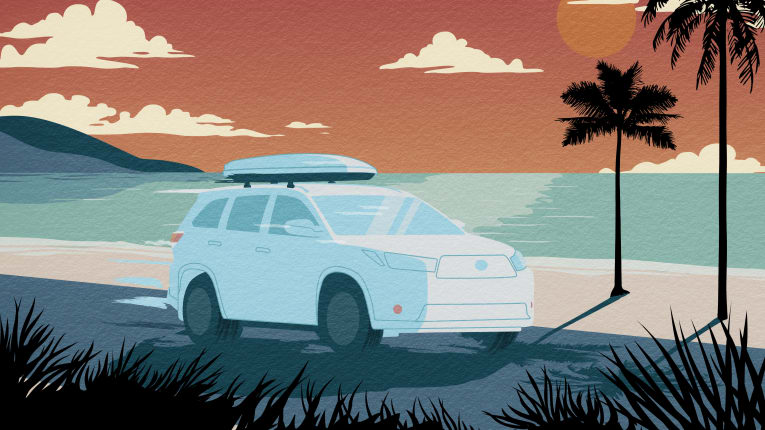 CARS.COM — Cue the ominous “Jaws” theme music — because the end of summer 2017 is closing in on us. Yep, it’s that all-too-familiar time of year that stirs abominable-yet-inevitable thoughts of shelving those rad American flag swim trunks and tucking away those trusty portable lawn chairs until next year.

In facing this reality, we should certainly take grandma’s advice to “accept the things we cannot change,” but why not make the most of the dwindling supply of glorious summer days by heading out on the open road for one last good old-fashioned, American-style road trip. But where to go? Maybe to a mountain resort with entertainment to enjoy a long ride out.

With less than a month to go before Labor Day weekend, it’s time to book those travel plans now if you haven’t already. Here’s where your fellow Americans likely are going, according to roadside-services giant AAA’s calculations, using road-trip routing data of the top driving destinations in the U.S.:

At a national average of $2.35 per gallon, gas prices have been on the rise since July, according to data from gas-tracking smartphone app GasBuddy. But AAA says the climbing fuel costs aren’t expected to keep drivers off the road this Labor Day weekend.

“Gas prices are still low enough not to factor into a family’s decision to travel or not,” said Beth Mosher, director of public affairs for AAA. “There’s a convenience factor with driving, and it’s always cheaper than putting the whole family on a plane.”

AAA has not yet forecast the number of drivers expected to hit the road for Labor Day, but Mosher said it’s been a “robust” driving summer. Memorial Day weekend saw the most drivers since 2005, she said, and Fourth of July weekend made history with the most travelers ever, according to AAA.

If you need some creative inspiration on where to head this Labor Day, check out this list of travel destinations for Labor Day weekend 2017 as ranked by travel website Tripstodiscover.com.

Like most weekends in this party hot spot, the Labor Day holiday is likely to draw revelers from across the country to indulge in libations, live music, disc jockeys and drag queens. The famous Creole-influenced cuisine — such as jambalaya, and po’ boy and muffuletta sandwiches — is a big draw for tourists visiting this Southern city. Leave your car with the hotel valet and stroll down the French Quarter’s Bourbon Street with the party animals, tour the elegant Garden District or explore the city’s supernatural side at the Historic Voodoo Museum — and don’t forget to stop for beignets and cafe au lait at Cafe du Monde (it’s a Crescent City cliché, perhaps, but a delicious one).

A go-to destination for East Coasters looking for refuge from the big cities, Martha’s Vineyard is a popular beach town seven miles up the coast from Cape Cod. It encompasses harbor towns and lighthouses, sandy beaches and farmland. To get to Martha’s Vineyard, take a road trip to Cape Cod, then hop on a ferry from the mainland.

The main port of “the Vineyard” as it is colloquially called, is buzzing with weekenders enjoying the many shops and restaurants the town has to offer. Travel website TripAdvisor urges Vineyard visitors to check out the “stately Greek revival houses dating back to the whaling era of the early 19th century” in Edgartown, “a seaside village of boutique shopping and pristine harbor views.”

Amid the Great Plains are the Black Hills of South Dakota and Wyoming that overlook sweeping views of lakes, forests and waterfalls. Hike the trails of Custer State Park — the second largest state park in the U.S., covering 73,000 acres, according to SouthDakota.com — and take a drive on the scenic Needles Highway. Of course, there’s also Mount Rushmore National Memorial, where the heads of four former presidents peer out from the towering granite. Or have an Old West gunslinger experience by driving an hour north to Deadwood.

This seaside town of on the northern coast of Oregon is known for Haystack Rock, one of Oregon’s most recognizable landmarks, rising 235 feet from the shoreline’s edge and offering visitors an up-close look at sea stars and other tidepool creatures at low tide. Outdoor enthusiasts can enjoy nearby Ecola State Park and check out the Tillamook Rock Lighthouse, a defunct lighthouse nicknamed “Terrible Tilly” for its dark, storied past.

Yellowstone National Park isn’t the only place in Wyoming for majestic mountain vistas. To the south is Grand Teton National Park, where outdoor adventurers might bump into a moose, elk or bison. Forest, hiking trails and waterfalls are plentiful, and Jenny Lake is said to be a great spot for fishing. Stay in an outdoor cabin or set up a tent under the stars.