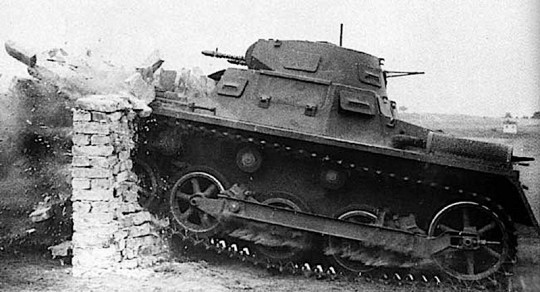 Over the following months, we’ll try to take a closer look at the most vicious, impressive and deadly machines of World War II.

And we will start with tanks. German ones.

For troops in combat, the most dreaded machine of war was the battle tank. Previewed in the first World War 20 years before, the tank played a major role in winning and losing battles In Europe, Africa, and Asia.

For the German army, the tank was undoubtedly the most important weapon they had. With it, the Germans invented a new type of warfare called blitzkrieg, or lightning war, that allowed them to circumvent or bypass enemy defenses and attack deep behind their main lines. THE BIRTH OF THE GERMAN TANKS
In the 1930s, Germany was witnessing the rise of the NSDAP, a far-right political party led by Adolf Hitler. Hitler, the man who would plunge the world in chaos no more than a decade after taking power, was looking for a way to wash the German shame oozing from the Treaty of Versailles which ended World War I.

As per the provisions of that treaty, Germany was not allowed to have an army larger than 100,000 men in a maximum of seven infantry and three cavalry divisions. It was also prohibited from manufacturing and stockpiling chemical weapons, armored cars, tanks and military aircraft.

That didn’t stop NSDAP and Hitler from talking to local industrial giants the likes of Krupp, Rheinmetall, and Daimler-Benz to create a tank for the new Wehrmacht. The leader of the manufacturing effort for the German tanks became Heinz Guderian, the man who would later grow to become one of the first leaders of the armored divisions.

NOTE: All the tanks you are about to read below are the main platforms. During their manufacturing, all tanks had perhaps tens of variations, depending on their use.

The first German tank, Panzerkampfwagen I, or Panzer I, entered production in 1934. It was a light tank created by Henschel, MAN, Krupp and Daimler mostly for training purposes.

Panzer I was powered by a Krupp M 305 four-cylinder air-cooled gasoline engine that developed only 59 horsepower and gave it a top speed of 50 km/h (31 mph). It weighed 5.4 tons and had two MG13 machine guns as the main armament. Only two soldiers could fit into the tank.

Despite being designed as a training tank, the requirements of war made it see action in the German divisions. By the end of the war, over 2,400 units of it have been built.PANZER II
The successor of the Panzer I, Panzerkampfwagen II, entered service in 1936. It was also a light tank, whose hull was created by Daimer-Benz, and the chassis by MAN.

Powering the tank was a gasoline 6-cylinder Maybach engine, capable of developing 138 hp and controlled via a 6-gear ZF transmission.

The engine gave the 8.9 tons tank a top speed of 39 km/h (24 mph). Its armament was comprised of two small caliber cannons and one MG34 machine gun. The tank was capable of accommodating a crew of three.

The tank was used in combat until the end of the war but was also the vehicle of choice for training. In all, over 1,800 of them were produced. PANZER III

The Panzerkampfwagen III was the first German German medium tank, produced from 1937. It was designed by Daimler-Benz and used a 12-cylinder Maybach engine good for much more power than the previous versions: 296 hp. The top speed was rated at 40 km/h (25 mph).

The tank weighed twice as much as the Panzer II, 23 tons, and was armed with various caliber guns. Two or even three MG34 machine guns acted as secondary armament.

For the first time, a crew of five soldiers could fit into the tank. The Panzer III was the first of its kind to use radio communication as a tool for maneuvering and gathering information. Most other armies relied on soldiers waving flags to let the tanks know which way the enemy is.

For the war effort over 5,700 of them were produced. The tanks fought on fronts in Europe, the Soviet Union and North Africa. PANZER IV
Panzerkampfwagen IV was the most widespread tank in the German armed forces during the Second World War and entered service in 1939. The medium tank was produced by Krupp and was powered by the same 12-cylinder Maybach engine used on the III, that gave it a top speed of 42 km/h (26 mph).

Panzer IV weighed 25 tons and was armed with a 7.5 cm (2.95 inch) gun and two MG34 machine guns. The metal body of the tank was capable of housing a crew of five.

This version of the Panzer was the most successful of them all, over 8,500 of them having been produced by the end of the war. PANZER V PANTHER
The Panzerkampfwagen V Panther was built as a main adversary for the Russian formidable T-34 and was also to be a replacement of the Panzer III and IV.

In service from 1939, the Panther – Hitler requested the model become a standalone tank and drop the V from its name – was designed by Krupp and used a monster of an engine: a V12 petrol Maybach that developed 690 hp and delivered a top speed of 55 km/h (34 mph) for the 44.8 tons behemoth.

The Panther is the second most widespread tank in the Nazi Army, about 6,000 of them being produced until the end of the war.

Cousins to the Panzers, the Tiger tanks were the heavy-weights of the Nazi armor force. There were two versions of tank, Tiger I and Tiger II, both designed by Henschel & Son. Both used the Maybach engine fitted on the Panther, and weighed 54 and 68 tons, respectively. In all, some 1,800 of them have been built. PANZER VII LION
Krupp designed in 1941 a super-heavy tank weighing 70 tons. The tank was called Panzerkampfwagen VII Löwe (Lion) and was supposed to make use of an 800 horsepower Maybach engine. The design was scrapped in favor of a Porsche designed super-heavy, the Mouse. PANZER VIII MOUSE
Panzerkampfwagen VIII Maus (Mouse) is the tank that might have changed the course of the war had the Allies wasted some more time en route to Germany. Created by Ferdinand Porsche, the tank was a massive 188 tons wall of steel, powered by a Daimler-Benz MB 517 diesel engine good for 1,200 hp.

Despite the huge power of the engine, the massive size of the tank meant the top speed was of only 20 km/h (12 mph), lower even than that of the Panzer I. Only two prototypes of the monster have been built because, well, the war ended.