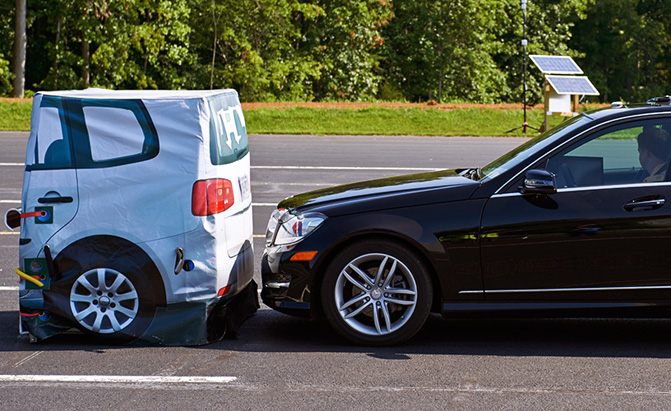 Forward collision warning systems are now being offered on a lot of vehicles, even affordable ones, but should you pay the extra money for a feature you may never use?

A forward collision warning system, or front crash prevention system, uses various types of sensors, including cameras, radar and lasers, to detect when a vehicle is getting too close to the one in front of it. The systems are most useful for essentially stopping a car from rear-ending another car. Most systems issue a warning like an audible beep or a flashing light on the dashboard, and some precharge the brakes, so when the driver hits the brake pedal, the car reacts quicker. Some systems can automatically brake the vehicle if the driver doesn’t respond.

The point of all this is technology simply to improve safety. Forward collision crashes, where the front of a vehicle collides with another vehicle on the road, are considered to be very common and usually just need a collision repair service, making up for about a quarter of all crashes. They can occur when the car in front of you brakes unexpectedly, or if you’re distracted or not paying attention. Rear-ending someone is typically seen as an at-fault collision; the person in the rear is always blamed for either following too closely or not paying attention.

How useful is it?

“We know that vehicles equipped with FCW get into fewer crashes,” said Russ Rader, senior vice president of communications at IIHS. He pointed out that cars with automatic braking are much more effective at reducing the amount of crashes than those with just warning systems.

“Auto braking vehicles are the most effective, it reduces crashes by 14 percent,” he said. “Forward collision warning drops crashes by about 7 percent.”

ALSO SEE: Should You Buy a Car with a CVT Transmission?

The IIHS takes into consideration how effective a car’s forward collision warning and prevention system is when assessing a car as a Top Safety Pick. In fact, in order for the institute to award a vehicle with the top ranking of Top Safety Pick +, the car needs to have some kind of forward collision warning or prevention system.

According to a study conducted by the AAA, drivers who have cars equipped with Forward Collision Warning were moderately satisfied with it.

“We’ve done some surveys that show that even though drivers may be annoyed by false alerts, the majority are leaving the systems turned on,” Rader said. “And drivers felt that the systems were making them safer drivers.”

Currently, there are two main types of collision warning systems: camera-based setups and radar-based ones. Camera-based systems are becoming quite common, showing up on mainstream cars like the Subaru Impreza. Both are effective at helping prevent crashes, although they can be affected by inclement weather and lighting conditions. Some reports have mentioned that radar-based systems are costlier to repair. So, the systems aren’t perfect yet, but they do help more often than not.

The Verdict: Why Your Next Car Should Have Forward Collision Warning

Forward collision warning systems and automatic braking are nice features to have especially if you are or have an inexperienced driver behind the wheel. It can help remind them to pay attention on the road, and help mitigate accidents. In the best case scenario, you’ll never have to use the system, but like airbags and seatbelts, when a collision does actually happen, you’ll be thankful the system had your back.

“These are the building blocks of autonomous driving,” Rader exaplains. “With auto braking, we’re seeing automakers improving and raising the speeds at which they initiate.” As forward collision warning becomes more mainstream, automatic braking will follow too, helping to keep our roads as safe as possible.