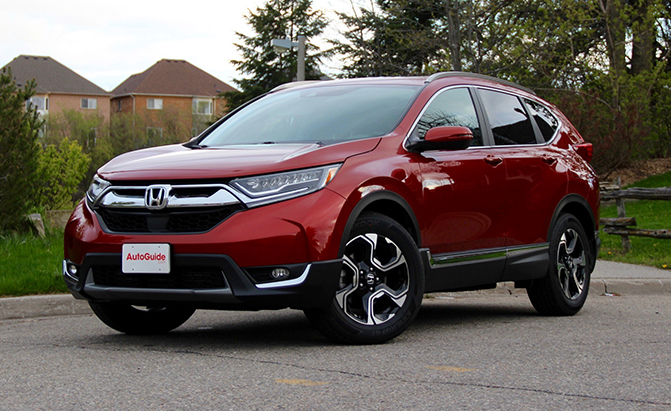 Before we dive into our next comparison, we thought we’d provide a little update on the Honda CR-V’s service as the AutoAfterWorld.com shuttle extraordinaire.

On the daily grind, it’s a champ, its long list of options pampering me and any passengers lucky enough to carpool to the office with me. On cold mornings, the commute starts with the heated seats and steering wheel being turned on, and the cabin warms up quickly. Both the passenger seat and two rear seats also benefit from heated seats, and each of the four primary seats is comfortable and spacious. Stephen Elmer also noticed that generous rear seat: “The real hero in the CR-V is the packaging, allowing the rear seat passengers to have a ton of space while still offering copious trunk storage.”

Although the infotainment system is occasionally too slow for my tastes, the satellite radio offers an endless variety of musical entertainment in addition to various app compatibility and either Bluetooth streaming or Apple CarPlay/Android Auto for your music or navigation. Then again, with traffic-based route guidance, using your phone-based guidance is less of a priority if you simply want to avoid major traffic snarls.

Another of the CR-V’s endearing but often overlooked features is its cabin storage. The cupholders are well positioned, the sliding armrest hides a deep, covered bin, a tray ahead of the shifter is perfect for even today’s huge smartphones, and door pockets offer additional odds-and-ends dumping ground and bottle holders. Honda engineers haven’t forgotten about rear seat passengers, who are treated to a fold-down armrest with cupholders, door pockets with bottle storage, vents in the center console and even a pair of 2.5-amp USB chargers. And legroom. All the legroom!

For the driver, adaptive cruise is a huge stress saver, especially on the worst parts of the commute on the worst traffic days.

But lest you think I’m simply drinking the Honda Kool-Aid, I’ll let News Editor Sebastien Bell recap his experiences with the CR-V on his road trip to New York City for its annual auto show last month:

“We started our trip to New York early in the morning, when patience is easily lost, but navigating was made easy thanks to Honda’s pretty darned good GPS system. It was easy to plug in the address that I was looking for, easy to change it when I realized I’d done something wrong, and easy to add a stopover when I remembered I needed to pick up Alex, our video producer.

As much as I appreciated the navigation system, I’m still not in love with the touchscreen. It can be a little dimwitted at times, but it works and the GPS never got lost, so it’ll do.

We started with pretty much an empty tank, and I girded my loins as I prepared for a hefty bill, but the tank isn’t all that large, so a fill up didn’t cost all that much. That sounds like it should be alarming on a long trip, since fill ups slow you down, but with an easily achievable 30 mpg (we were well on our way to 31 by the time the trip ended), it meant that we only had to fill up once more on the way there and then again on the way back. And that’s pretty good for a 16-hour round trip.

In any event, I was able to take all of the uncomfortable lumps out of my pockets because there was ample cubby space. The sliding shelf in the center bin was the perfect size for a cellphone (not that I would have it within arm’s reach while driving in Ontario) the pocket in the door fit my wallet and a water bottle easily, along with a bag of snacks. In the middle, the cupholders were more than big enough for any drinks we got, and even fit a packet of Burger King Jalapeño Chicken fries, which I think shows forethought.

I’ve said in the past the CR-V feels a little wimpy on the highway, probably because of its small engine, and I don’t think I was wrong. When you throw it into “sport mode” (heavily sarcastic quotation marks) all that seems to happen is that the engine wheezes and whines more. Sure you pick up some speed, but it felt no different than the rate at which speed changed in Econ mode. That said, in Econ mode, the car is still perfectly capable of getting to highway speeds, passing anyone at any reasonable speed and cruising comfortably. As a result, I just ended up leaving the car in Econ mode the whole drive. Alex threw it into Sport mode briefly, but all it did was hurt our mpg. Essentially, it never feels “fun,” but that’s OK. Honda knew what it wanted with this and went for it confidently. I think the result is a really good hauler.

It was confident on the highway, reasonable in the city, economical, comfortable, and more than spacious enough for all of Alex’s camera equipment. That said, I didn’t feel particularly attached to the car after my time in it. It’s a brilliant appliance, but even with a name like Carl [the first four figures on its plate happens to spell CARL… –Ed.], I didn’t really miss it when it was gone. That’s a pretty weak indictment, but it’s my only real gripe apart from the slow info screen and the awful sport mode.”

Like Sebastien and every other editor that has driven the CR-V, Stephen found it supremely comfortable, and the cabin experience marred only by urgent acceleration: “The 2017 Honda CR-V drives comfortable, with its combination of supple suspension, quiet cabin and seat comfort. Only the rough roar of the small 1.5-liter turbo is enough to upset the occupants of the Honda, but once you’ve accelerated, the engine quiets down and provides smooth miles. “