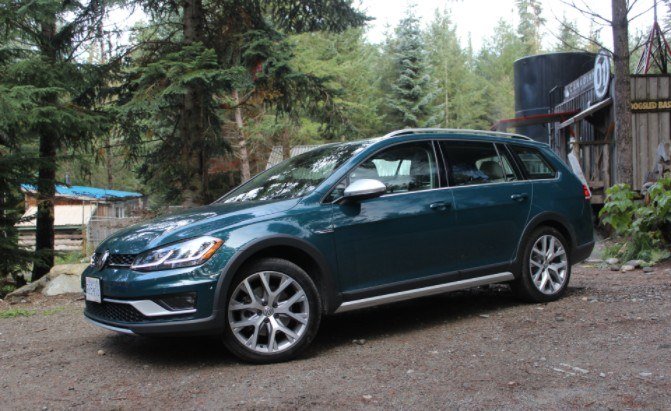 One might say that the aptly-named Alltrack had quite the hill to climb when it debuted for the 2017 model year.

Station wagons – once a staple on American roadways – have largely been replaced by small SUVs and CUVs, and Volkswagen happens to make a very good one in the form of the Tiguan. So there’s your first strike against the Alltrack.

Sure; you’ll see a ton of those in the Pacific Northwest, though they don’t have quite the same draw in other parts of the country. So you can see how not only does the Alltrack have the spectre of the Outback hanging over its shoulders, but it needs to compete for pieces of a rather small pie.

Thirdly, there’s the Alltrack’s three- and five-door Golf hatchback sibling, which is such a massive seller that you might think VW doesn’t even make any other models.

So, it has to be said that the Alltrack always had the odds stacked against it, and now those odds are ringing true with the recent announcement that the Alltrack and its Golf Sportwagen variant are kaput after 2019 when the new 8th generation Golf makes landfall next year.

So, is it time to rush out and get one of these? Could it be a future classic, as my colleague Justin Pritchard recently claimed?

Well, the latter’s obviously very hard to define but what I can tell you is that there is a whole heck of a lot to like about the Alltrack.

In addition to the plastic cladding ‘round the wheel wells and rocker panels (as opposed to the wide-fenders of the Golf’s Audi A4 Allroad cousin), it also gets a higher ride height than does the Sportwagen (by a mere .6 inches, but still) and suspension that’s actually been tuned to better handle some rougher roads. Of course, 4Motion AWD is standard on all three trims – S, SE and SEL.

Inside, you won’t find much difference here than you will in the basic Golf, which is no bad thing as it exhibits one of the better interiors in the compact-car game, especially on the higher trims. Tight panels gaps and high-quality materials are found throughout, though I’m a little unsure about the silvery faux-carbon fibre inserts found on my tester. I think it looks a little tryhard and cheap; a brushed-aluminum look would be a better fit.

Otherwise, the detailing is spot-on (I’m especially found of the aluminum pedals), with well weighted controls for your infotainment system as well as your wiper and turn indicators.

The Tech You Need

Speaking of Infotainment: Both Apple CarPlay and Android Auto are supported on all trims, though the top two trims get a larger screen — a jump from 6.5” to 8” – on which to display it all.

It’s a mostly flawless system once you get it all set-up; I did have to unplug and reattach my iPhone in order to get the system to recognize it, but once that was done, it picked up fine every other time I used it, and I was able to enjoy the optional Fender audio system (eight speakers, 400 watts) without any interruption.

Being a vehicle aimed and younger, active buyer, tech is important but if they aren’t going to just flock to the Tiguan or another vehicle in the segment they’ll need to see that the Alltrack has the capabilities of the Tiguan when it comes to storage and interior space too.

Well, there’s almost as much storage in here (a difference of about 200L or 7 cu-ft, whether behind the front seats with rear seats folded, or behind the rear seats) as there is in the Tiguan.

The rear seats fold in a 40/20/40 split, so you don’t lose the left or right seat if you need to transport longer items. Plus, the cargo area is easier to load thanks to a lower liftover height – particularly helpful if you’re shorter in stature.

And if all that’s not enough for potential Alltrack buyers, roof rails are standard if you want to transport bikes or install a cargo box.

A rare strike against the Alltrack, you will find more room in the second row in the Tiguan.

The driver’s seat, meanwhile, gets the same oh-so-perfect driving position the Golf is known for, that feels more spacious than the Alltrack’s compact platform suggests. The seats could perhaps use a little more bolstering, but that’s about the extent of the issues I found with the driving position, while the wagon styling makes for a great 360-degree view out. Even more so with the massive full-length panoramic glass roof on my tester. Perfect for when you want to see snowy peaks on your next road trip through the mountains.

Engine Feels More Potent Than it Is

Power comes from the popular 1.8L inline-four TSI turbo motor that powers a number of vehicles in the Volkswagen Auto Group’s portfolio. Power is rated at 168 hp and 199 lb-ft of torque, fed to all four wheels (depending on road conditions and drive settings) through either a six-speed manual or my tester’s six–speed dual-clutch gearbox, which remains one of the best examples of its type available in the passenger car market today. The shifts are crisp and responsive (again; how responsive depends on your drive settings) and wheel-mounted paddles are on-hand to add even more involvement. Much better than bumping the shift lever up and down, I can tell you that, though that’s an option, too.

Since all the powertrain elements work so well in unison, the drive of the Alltrack is a suitably athletic one – despite the increased body roll. VW has perfected the small car formula over the years and lessons learned have made their way here.

An “Offroad” setting (added to the Eco, Sport, etc. modes found in other Golfs), is offered for those who plan to take advantage of the raised ride height.

It provides slightly less-responsive but more linear throttle inputs and even has a hill-descent function that allows you to focus on your steering. Plus, off-road mode provides displays for you steering angle, altitude, and compass.

My time spent with the Alltrack included a mix of Eco and Sport modes, because I just had too much fun enjoying drives on the beaten track as opposed to off it. In addition to the strengths displayed by the powertrain, the steering is precise and once you get past the slight increase in body roll you know you’re driving one of the best-engineered compacts available today.

Which, of course, raises the question as to whether or not there’s enough here to dissuade one from the Tiguan or any other of the approximately 8.2 million crossovers available on the market today. Well, if you’re a family of three (with a dog, perhaps) that likes to go camping or canoeing, then absolutely the Alltrack is right on.

I’d even say that a family of four could get by with some clever packing choices (and a roof box), and my bet is they’ll enjoy the drive to the campsite more than any SUV or CUV driver they come across.

A future classic? Well, it’s one of the last VW wagons you can get in North America (for now), and that fact alone gives it some classic credence. Add the off-roading digs a la Golf Rallye circa ’89, and as the Alltrack scrambles off into the sunset it looks every piece the winner on one hand, and every piece the mystery on the other.