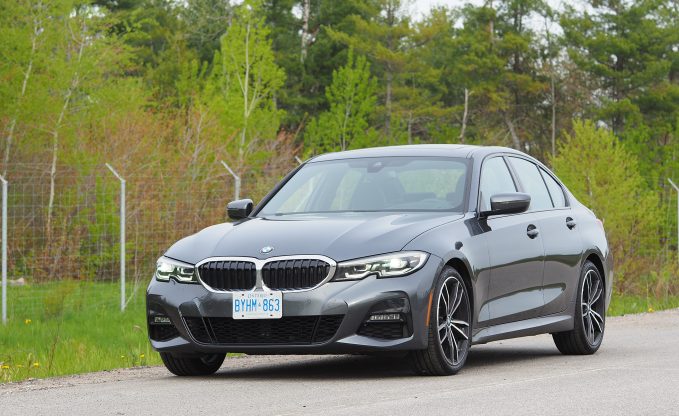 BMW sticking to its guns gave enthusiasts hope that all was not lost and that you didn’t have to choose between performance and family. That was, until the F30 came along. This generation, produced between 2013 and 2019, was a bit of a damp squib.

This 2020 BMW 3 Series however, part of a tip-to-tail redo that debuted last year, has given us hope. Not only are the headlamp accents reminiscent of the now-classic E46 but it looks much more muscular than the rather timid looking old 3 Series it replaces.

Having made the previous statement, the 2020 BMW 3 Series does look better than the old one but gets a bit lost in the current lineup of BMWs which have almost identical faces. In fact, many of my car-savvy friends mistook this for the larger 5 Series.

You can’t, however, mistake it for anything other than a BMW. Compared to the model it replaces, it is longer by 4.0 inches; the increases in width, height and wheelbase however are marginal.

Other prominent visuals include the large brakes, dual exhausts, and a generous dose of LED lighting at the rear and front. The new fascia is assertive, confident, more dynamic and angular, instead of graceful and curvaceous. Just behind the grille are an array of computer-controlled slats that actively balance fuel-saving aerodynamics against the real-time cooling needs of the engine. The movement of the slats is a subtle bit of theater for someone who happens to catch it, and a visual nod to the brand’s promise of efficient performance.

But on first impressions, the new BMW 3 Series hits hardest once you’re on board and seated.

The generous use of fancy tech and high-end touches are hard to ignore. In addition, most surfaces and the quality of material used seems to be from a segment above.

Fire it up with a button press. The instrument cluster vividly animates to life, your seatbelt tests the tension, and your selected presets are recalled automatically. Then, it’s just a half-inch tip of the gear lever rearward to engage DRIVE, and you’re off.

On your first visit with a prospective 3 Series, and at startup on all drives thereafter, the car gives you a little bit of a show. That’s because BMW wants to wow you with this car, perhaps harder than ever, and perhaps because it know you’ve got plenty of other great options for the money.

The result is better-than-ever bang for your luxury car buck, which is good news for the folks with their checkbooks ready.

Call it equal parts lavish and high tech, largely lined with lovely leather, high-end materials, high-resolution displays, and modern-looking interfaces and switchgear. The tech-savvy folks and gadget enthusiasts—your writer included—will approve of how much of the forward visual scenery is occupied by fully-digital readouts with great graphics. If you’ve ever wanted to drive a spaceship, you’ll love what’s going on.

Blessedly, there’s no shortage of tactile hard-buttons for easy operation of climate controls and stereo functions. Drivers can even customize readouts on the fly, or call up news or weather reports with their voice. There’s little on board that can’t be operated via voice command or fingertip scribbling on the central touch-control pad and dial that remotely controls the central screen. If you’re not a tech-savvy type, plan a few hours to get used to your new supercomputer central command system.

The screens and touch-interfaces are integrated cleanly within their surroundings, and simple shapes and touch-control layouts are favored. The result is a driving atmosphere that’s unmistakably techy-looking, but never undermines the richness of the whole cabin.

At 5’10” and roughly average build, I found the driver’s seat to add to the feeling of driving an athletic car. It’s snug and comfortable. You sit much lower in the 3 Series than in other cars which puts you in a better position to feel how the car is behaving at any point in time.

In the rear, two average adults should find adequate room in all directions, though some may find the shape of the door opening a little awkward. Further rearward, trunk space at almost 17.0 cu.ft is as expected, and the power trunk lid includes handy functions for both closing the trunk and locking the car.

The highway ride highlights signature BMW 3 Series attributes that repeat owners will probably find familiar. The cabin is relatively quiet even at highway speeds. Undulations are handled with minimal fuss. It feels planted at all times and gives the proverbial stuck-to-the-road feeling which is a testament to the suspension setup. Despite the stiffer setting it never feels harsh or out of shape.

The power comes from a 2.0-liter turbo-four that has received some new tweaks to its innards for the G20 3 Series. At 255 hp and 295 lb-ft of torque it features higher output than before. If you feel the 255 hp output is inadequate, better-performing options are readily available.

The torque is now available lower in the rev range, which aids fuel efficiency. Plus, for relaxed drivers, this means the 330i gets up to speed with just a whiff of throttle input, just-off-idle revs, and nearly no noise. If you’re after a laid-back drive that’s peaceful, efficient and responsive, consider yourself covered. In fact, it’s the perfect setup for a light-footed driver, as engines like this one are most efficient when operated in low-rev situations.

For the sportier among us, that deep well of torque means more immediate and satisfying response when we dig deeper into the throttle. Usually, there’s little need to exceed about 2,100 rpm and that’s good for your fuel bill. With eight gears, highway-speed revs are kept nice and low, to the same effect.

A Return to Dynamic Goodness

Opened up, the engine and transmission make quite the team. The eight-speed automatic almost immediately engages whichever gear will get the engine into its sweet-spot: pull out to pass and the revs rise, with the turbocharger spinning away. Upshifts are rev-matched with atomic-clock precision, and are liquid-smooth. Responses to paddle shifts are among the quickest and most immediate you’ll find in the market—giving drivers a good reason to click away and manually browse the forward gears.

All the while, the engine is delivering loads of torque and whisking you along with a mellow and smooth growl that’s pleasingly audible. As a luxury car engine should, this one never feels or sounds overworked or strained, however operated. The redline might be a little low for some tastes, but this boosted four-cylinder packs plenty of high-end power into the roughly, 6,000 rpm it’s got to work with.

I found the brakes to be as expected from a 3 Series. With a strong initial bite, easy modulation, and a pedal that feels more precise the harder you work it, returning 3 Series owners will feel right at home with some of the best braking feel in the game. The electronically-assisted steering too, though single-finger light at city speeds weights up nicely as speeds climb. It almost feels like a hydraulic unit and returns much better feedback as well. This results in predictable steering in the corners and all that’s left after that is target fixation and following the corner through with a massive grin.

The cabin and digital interfaces along with the rear seating quarters of the new BMW 3 Series will impress most shoppers. Thing is, with rear-wheel drive and a 2.0-liter turbo that’s just as powerful as the 330i’s, the less-expensive Genesis G70 also tugs at your attention. And as far as driving dynamics and ride quality are concerned, it might actually be superior to the 3 Series, which just goes to say how far the competition has come in the segment.

I’d also advise any shopper considering the 330i’s M Sport package to spend some time on the roughest road available on a test drive to assess ride quality for themselves. The lower-profile tires and wheels work flawlessly on highways and cloverleafs but seem out of their element in the rougher sections of town. So consider where you live before you put the extra money down for added inconvenience.

Ultimately, the new BMW 3 series is a considerable improvement over the old model. Yes, BMW has brought the 3 Series back to its roots of being a driver’s car, but it’s no longer the only choice for that in its class. The deciding factor is how much you value that blue-and-white badge.