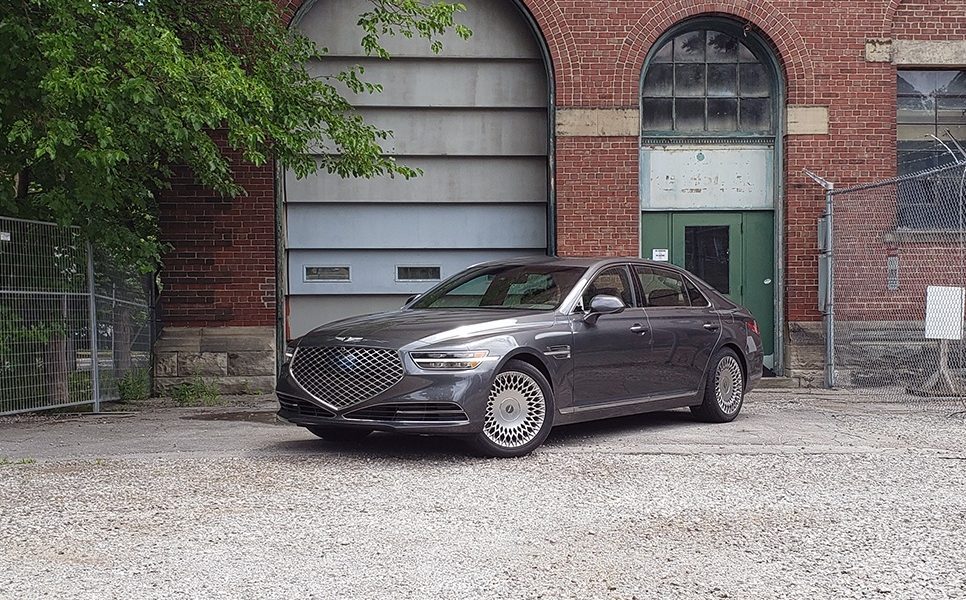 It is a testament to the success of the Genesis G90 that it wasn’t until my last day with the car that I discovered that its 5.0-liter V8 sounds absolutely stunning when you rag on it.

Not only hadn’t I heard it until my last day with the car, I’d had no desire to hear it, nor play around in sport mode, until our last day together. That’s because this car has the best Comfort Mode I’ve ever used.

From the front seat, at least, this is a very successful car. From the back though, it is slightly less so, failing in a few small but important ways to keep up with the competition. The G90 impressed me and my passengers, but that’s the bare minimum a car in this class has to achieve and this isn’t a class where minimums are tolerated.

Genesis Take 2: Back with a VenG(90)eance

Heavily redesigned for 2020, the G90 is Genesis’ mid-cycle attempt to keep up with the best luxury barges coming out of Europe. Genesis says it has changed every body panel except for the doors and the roof, and it shows. Whereas the old car looked slightly out of date when it was released, the new one demands your attention. Its massive grille, and the general affection for it, is making BMW designers pull their hair out, I’m sure. But my mom has a theory about cars like these (Lexuses and Genesises and the like) and it’s that their designs have to do a lot of selling, so they’re more impressive in the moment than their German counterparts, but they age worse, as a result. Of course, only time will tell if that theory applies to the G90, but the gaudiness of the grille and the rims suggests to me that she may be onto something.

Still, for the time being, at least, it’s a very impressive design. Whenever I parked on the street people slowed when they walked past it. Living in a city where patios have opened, I saw more than one person rise out of his chair to get a look at the car as it was driving by. So whether or not it ages well may be beside the point. It’s garnering attention for Genesis right now.

The price has garnered attention, too. Starting at around $75,000 ($89,750 in Canada) it undercuts the big names in the segment by a wide margin. It starts at 20 grand less than the cheapest S-Class, though it’s right about on par with the Lexus LS. Mind you, both of those have a hybrid option, which the G90 is missing. What’s worse, though, I have a suspicion that when you get to these kinds of price points, what’s cheaper isn’t actually what sells. I suspect, instead, that undercutting the competition makes buyers look cheap, not smart.

Things start looking less euphemistically smart and more expletively expensive when you step inside and feel the rich piling of the carpets and the buttery softness of the leather. With all the sunshades up and a world of seat adjustments at your fingertips, the G90 starts to lull you into a well-earned sense of security. But the moment that I felt like this was a properly luxurious car was the moment I touched the gas pedal.

If we were playing Family Feud and Steve Harvey said “we asked 100 people, ‘name an adjective to describe how you want a car to feel’” the top answer would be peppy. Despite what the eggheads at Powell Motors would have you believe, people want peppy cars and pep happens between 0-30. So automakers often make the first little bit of acceleration as aggressive as possible to give people that pep. Tip into the throttle and most cars try to feed you a jolt of acceleration. But the G90 doesn’t do jolts. The G90 has 420 hp and a 5.0-liter V8 under the hood. It knows it’s fast. It prefers instead to deliver a steady, slowly building stream of power to the wheels and it’s a spectacular, sumptuous, serene experience. It’s one of the easiest cars to drive smoothly out there.

Whoever did the throttle mapping deserves a raise because they did an exceptional job. The G90 whooshes up to speed with neither fuss nor muss gliding you toward your high-power business meeting or your photoshoot for Business Meetings Monthly. And that’s to say nothing of the cloud-like ride quality.

The smooth acceleration means that passengers in this car don’t have to bobble their heads and really, that’s who this car is for. If you needed any more proof that this is a car designed for people who want to be chauffeured around in than the quilted leather back seats, then take a look at the little seat adjusters. Not only do the rear seats recline, heat, and cool, the passenger-side back seat passenger can also control the seat ahead. The occupant can push the front seat ahead of them and out of the way so that they can stretch out their legs and relax.

The Trouble with Cheap

That is where the lower price point starts to rear its ugly, impoverished head. Unlike the S-Class or the 7 Series, there are no pillows on the back seats’ headrests. Fine, you say, I can bring my own. But your hands will be full of tablets because as far as I can tell there is no option for in-seat entertainment, only optional tablet holders. Worst of all, I had to stretch my own legs, using my own muscles, that were sore from all that time I spent with my personal trainer. Unlike the S-Class or the A8, there’s no footrest for either back seat passenger.

It’s all very comfortable, and it’s probably all the comfort you need. I don’t know about you, though, but I have a deep, endless well of desire for comfort and the word “enough” is anathema to the whole exercise of being chauffeured around. Although my roommates were impressed by the car and its sumptuous comfort, I did find myself running out of gadgets to impress them with pretty quickly.

I think maybe Genesis has made a gambit here. With the price where it is and the grille as big as it is, I think maybe this is a luxury car more for people who aspire to the top-of-the-range S-Classes but can’t really afford it. And that might be smart. But it doesn’t quite rise to the level of an S-Class.

I have another relation who has another theory about consumer goods, though. That being my step-grandpa, who says you should never buy something with more than six features because you’ll never use them. And I think he might have a point. The experience of this car—its silky-smooth ride, its soft suspension, its comfortable seats, its fancy looks—is excellent. And although you’ll run out of tech to show off with, your tech won’t run out of style. And what you’re left with is comfort in a way that never gets old.