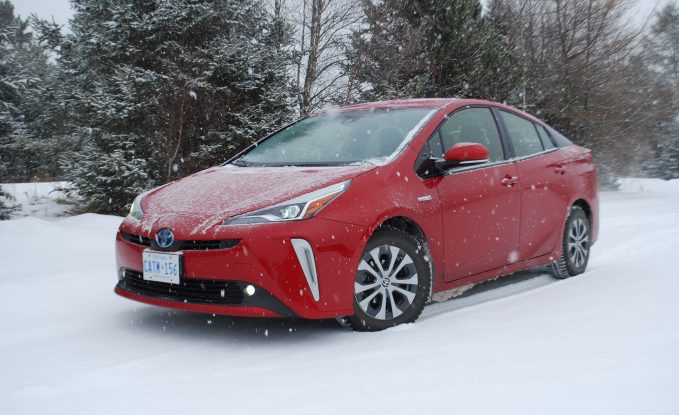 As anyone who owns a toddler knows, it is easier to solve Fermat’s Last Theorem than it is to get a small child to eat their vegetables. How many of us were told as tykes not to eat cookies before supper lest we ruin our appetite?

Fortunately, as your author rapidly enters his fortieth year, he has figured out that if I ruin this appetite, another one will be along quite shortly. Then another. I see no danger in running out of appetites.

However, no matter how much we would like it to be so, adults recognize they cannot subsist on Chips Ahoy alone. Vegetables begrudgingly appear on shopping lists, usually toward the bottom after toilet paper and two bottles of J.P. Wiser’s Vanilla-Flavored Whiskey. To the produce section we trudge, silently eyeing that package of chocolate pies.

The 2020 Toyota Prius AWD-e served as a reminder to your author to eat his vegetables, appearing after a series of large SUVs and pickup trucks big enough to earn their own area code darkened my driveway during the previous month. Approximately one hundred horsepower doesn’t sound like a lot, especially in the wake of rigs with sky-high output and torque stretching into four-figure territory.

Having hoovered down those truck-shaped cookies, then, my appetite for vegetables has been sufficiently ruined.

For 2020, Toyota has added an all-wheel-drive model to its Prius lineup. The OG hybrid has experienced a precipitous drop in sales. It fell to 69,718 units last year in America from a high of nearly a quarter-million in 2012. Some have blamed the current model’s gonzo styling, full of more cuts and slashes than a tent visited by Zorro. A recent facelift binned the outrageous tail lamps which resembled a lightsaber, iff Luke had pretzeled his lightsaber around a Panopticon willow tree like an angry golfer. This author liked those controversial taillights, thank you very much, as they stood out brightly in a sea of sameness. The current ones are not nearly as compelling. Our tester was painted a delightful shade of Supersonic Red which, along with the available Electric Storm Blue, is far more compelling than the dullard grey and white paints.

The weird split rear hatch window remains, with the upper half listing like the Titanic in its last moments. The lower section stands bolt upright like a church pew. It’s a strange design but, with a drag coefficient of 0.24 Cd, at least the wind thinks it’s beautiful. Only the upper section is treated to a wiper/washer, leaving the other portion to get (and remain) covered with slush and salt spray while driving in the winter.

Which, after all, is the point of this AWD-e model. As an electric on-demand system, it provides instant torque to the rear wheels when you need extra traction while operating in front-drive mode the rest of the time. Now that Toyota builds the Prius on its New Global Architecture, its designers and engineers can take advantage of toys and tools in the corporate cupboard that may otherwise have been off-limits.

A Prius with AWD required the addition of a stand-alone electric motor packaged within the car’s rear multilink suspension. Packaged thusly, it intrudes not one whit on passenger or cargo space. The link with this motor and its dance partner up front is purely electronic – there is no actual driveshaft. The whole works adds about 120 pounds, some of which comes from the nickel-metal hydride battery pack. That’s right: the AWD-e bins the FWD’s lithium-ion battery in favor of one that apparently plays more cold-weather friendly.

The 1.8-liter four-banger paired with dual motors push a net system total of 121 horsepower. Those propulsion devices produce 96, 71, and 7 hp, respectively. The reasoning why one simply cannot add them all together causes this author’s mind to spin out of control. Even more than it does after his grog ration of cheap vodka. The power units all peak at different times, and the combined 121 ponies are sufficient enough to move the Prius out of its own way.

Grip is noticeable, with a late winter snowfall fortuitously providing the opportunity to chew up some of the white stuff. Dynamics are numb but, to be blunt, that’s not what most Prius buyers are looking for. They’re more interested in good winter grip and great fuel economy. In this, the Prius AWD-e succeeds.

I covered nearly 250 miles in the span of a week, approximately 80 percent in city driving conditions. The Prius AWD-e requested just 5.3 gallons with which to brim its fuel tank. This placed back-of-napkin economy between 47 mpg, close enough to the EPA ratings of 52 mpg city and 48 mpg highway. This was in Normal drive mode, as Eco is an infuriating exercise in throttle neutering and Power just changes the dash lighting to red. Fuel economy is projected to be 2 mpg higher in the absence of all-wheel drive.

Interior ergonomics remain from the school of thought that hybrid cars are treated like science experiments. The Jumbotron infotainment touchscreen controls most of the functions, though real buttons instead of capacitive touch for ventilation controls would be very welcome. The system responds quickly and has good graphics, which is fortunate because you’ll be turning to it frequently. Some ergonomic quirks are pure head-scratchers. A bank of dashboard warning lights is far closer to the passenger than driver. And the Prius comes with an old-school pump-and-dump foot-operated parking brake. The latter is a blast of nostalgia in an otherwise futuristic interior, as if one were to stroll onto the bridge of the Enterprise and find Captain Picard tending to a woodstove. Space is adequate for a quartet, though the barbershop may need to leave the tuba at home.

Toyota, perhaps, is responsible for the mainstream acceptance of hybrid cars as something more than a simple curiosity meant for the science fair. This latest iteration removes some of the previous model’s quirky design decisions while retaining the personality and efficiency so prized by its core demographic. While your author would prefer the old car’s gonzo taillights, he also understands the need to cater to the mainstream. Look at the success enjoyed by the all-electric Leaf after it was de-weirded by Nissan.

Stellar fuel economy, noted Toyota quality, and a bagful of green cred. All this proves there is nothing wrong with eating yer veggies. However, given and the ability of hybrids from other makes (and from Toyota’s own stable)  to equal the Prius’ efficiency, there may be other veggies out there that are easier to swallow.