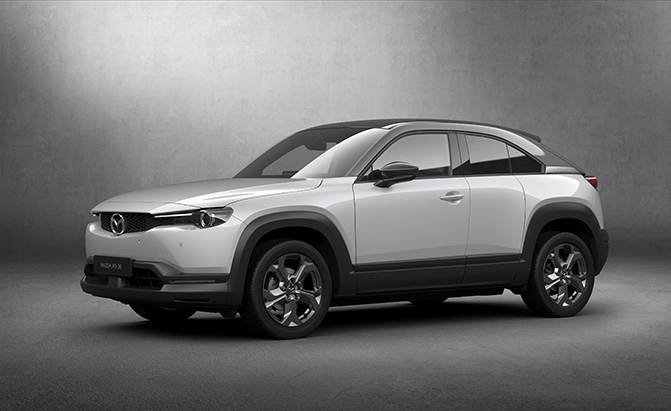 Yesterday a leak showed off the MX-30 ahead of schedule. Now it’s official, and Mazda has revealed some—but not all—of what buyers can expect when it goes on sale some time next year.

In terms of size, the MX-30 slots into the Mazda lineup between the existing CX-3 and CX-5 at 173 inches. That’s exactly the same as its conventionally-powered sibling, the CX-30. So why the MX name, a la the MX-5 Miata? According to Mazda, MX models “has always been about models that go their own way and convey new values ​​without being tied to the conventional ideas of the present.”

A crossover isn’t exactly against the grain though. An all-electric model with a set of suicide doors certainly is, however. Mazda’s revived the RX-8’s unusual opening layout here, with rear doors that require the fronts be opened first. It’s a sizeable aperture thanks to custom-designed hinges, allowing the fronts to open to 82-degrees, and the rears to 80-degrees.

The interior adopts various sustainable materials for a light and airy feel. Or, as Mazda puts it, a sense of being “enveloped in openness.” The new fabric covering the door trim is made from recycled bottles. There’s cork in the center console too, which is a floating design, opening up more space underneath. There’s a 7-inch touchscreen just ahead of the shifter for climate control, with redundant buttons on its bezel for gloved hands.

As for the powertrain, Mazda is only saying the MX-30 features a 33.5kWh battery pack. Using a Type 2 connector and a 50kW charger, owners can expect an 80% charge in 30–40 minutes. Mazda is estimating a 124-mile range under the WLTP regulations. Pre-orders are already available in Europe with sales beginning in roughly a year. Expect an announcement on North American availability over the coming months.