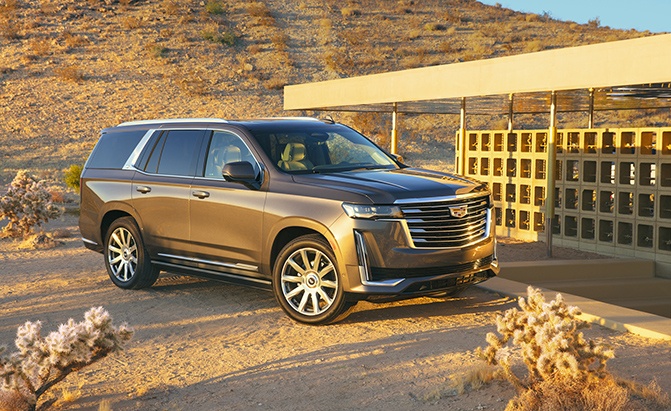 Cadillac unveiled the new Escalade tonight at an event in Los Angeles.

The Escalade is among Cadillac’s most important vehicles and is the oldest nameplate in the current lineup. So it had to pull out all the stops to impress the automotive world and has come up with the industry’s first curved OLED screen, a truly massive AKG sound system, and it will be the first SUV with Super Cruise.

Cadillac also told us at an industry event that the Escalade will have 10.4 more inches of legroom in the third row thanks to sliding second-row seats and a redesigned cabin that allows third-row passengers’ feet to sit more naturally and low.

That last improvement is thanks to the independent rear suspension allowed for by GM’s updated chassis and does not claw into cargo space, which in fact grows by 80% behind the third row.

Cadillac promises that along with making the cabin more comfortable, the independent rear suspension makes the Escalade drive better, too. They are careful not to say it had “sporty handling,” though, because they were more concerned with comfort, fitting the softest bushings they could manage and adding magnetic ride control on mid- and high-trim packages.

In fact, the highest trim comes with Magnetic Ride 4.0, which takes advantage of an increased number of sensors to better predict road conditions and isolate you even more from the road. Air ride suspension will also allow the Escalade to raise itself up in case some light off-roading is called for and lower itself for better fuel economy, should that be preferable.

Speaking of sensors, the Escalade is loaded with them. That, among other things, is in order to run the latest version of Super Cruise—which we covered on January 28. In short, more sensors allow for more natural driverless driving and new software allows for new features, like Lane Change on Demand (flick the indicator and the car goes into the next lane).

Along with the newly added sensors are nine camera views which will allow for easier towing as well as night-vision and even that updated software even allows for augmented reality. According to Cadillac’s Infotainment Program Manager Joanne Leddy, the Escalade will be able to display route instructions over footage of the road displayed on the gauge cluster.

The screen behind the steering wheel will be 14-inches large and the footage will use one of those 9 cameras to show you a feed of the road ahead. Like a video game, the Escalade will overlay an arrow (or something similar) that will appear to grow as you near it to show you exactly where your next turn is.

The major advantages of OLED are that parts of the screen can be turned completely off during display, allowing it to show true blacks (instead of that vaguely blueish, backlit black that most screens show). It also allows for richer colors and twice the pixel density of a 4K TV, meaning extremely high-quality graphics. The actual screen can also be extremely thin and made of plastic, which is what allows for the infotainment screen to be curved towards the driver.

It’s not just the driver who gets OLED screens, though. The headrests of both front seats have 12.6-inch screens in the back of them for second-row passengers. The screens also come with HDMI cables and can be controlled individually. They can also be mirrored to other screens in the car, so two people can watch the same or different video.

The backseat passengers also have access to the Escalade’s GPS system, so back seat passengers can see where they’re going, like on a plane. They can also pick a new destination and submit it to the driver for their approval.

And just because each screen can be watching its own show doesn’t necessarily mean the passengers need headphones. Thanks to AKG’s 36-speaker sound system.

AKG, in case you aren’t hip, is mostly in the business of making sound equipment for studios and concert halls, so it’s appropriate that a vehicle this vast uses them. The point wasn’t just to make the Escalade extremely loud, according to Brian Wheeler, an AKG acoustic engineer and senior manager. The system was designed with that many speakers so that every seat could get its own 3D sound experience. With speakers in the pillars, the roof, and the headrests, the driver can get surround sound even if their passengers’ speakers are completely off.

The system is also available in a more traditional 19-speaker setup that is a little less adjustable from seat-to-seat, but that still allows for the sound to be used in the augmented reality system. Like the arrow telling you where to turn, Cadillac wants to use the sound system to make the audio directions sound like they’re far away when the turn is far away, and nearby when you get closer to it. Volume, bass, and treble will all also be adjusted to keep up with road and noise conditions.

“The 2021 Escalade takes its leadership into a new era of mobility, with comprehensive upgrades that are transformative to the driving experience,” says Steve Carlisle, president of Cadillac. “It has the bold presence and exclusive technology to elevate the extraordinary and make every drive feel like an occasion.”

The 2021 Escalade will go on sale in the late summer of this year and production will take place at GM’s Arlington, Texas assembly plant. Pricing will be announced closer to the launch date.

Facebook Twitter Google+ LinkedIn Pinterest
Previous article Every 2020 Super Bowl Car Ad, Ranked Worst to Best
Next article Hyundai Tucson vs Kia Sportage Comparison: Which One is Right for You?