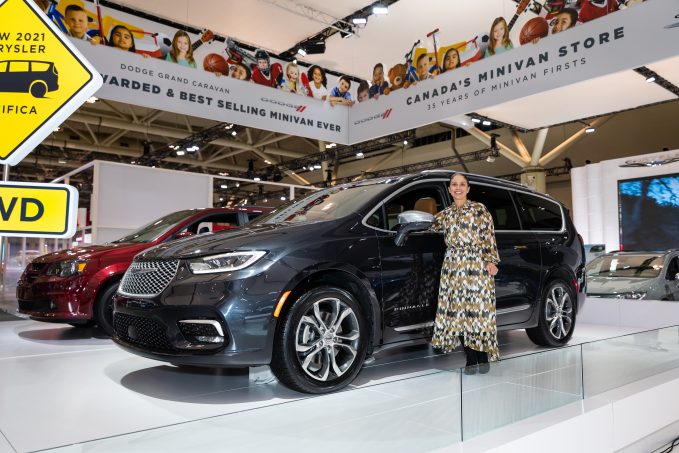 Mary Ann Capo gets right to the point. Her first words in our interview about the 2021 Chrysler Pacifica, from inside the vehicle itself at the Canadian International Autoshow, are clear: “We invented the segment. We invented the minivan. So we take pride in always being the one to innovate.”

Capo is the senior manager of Chrysler brand product. The Pacifica is, ostensibly, the marque’s headlining model. It arrived in 2017 to positive reviews, with many outlets—including AutoGuide—praising it for its combination of family-hauling practicality and luxurious digs.

Yet here we are just four years later with a substantial update on our hands. That’s a pretty short span of time, not just within FCA but also in the minivan segment. It’s not a simple nip-and-tuck either. The 2021 Pacifica adds, amongst other things, all-wheel drive, an even more luxurious top-shelf Pinnacle trim, and new crossover-inspired looks to the package. Capo stresses the last part early on, with a theme that continues through our chat: giving the customers what they want.

“With the industry moving to UVs (utility vehicles), to four-by-fours with all-wheel drive, we certainly have that now, and we know people that may have left the minivan segment are going to take a look at us again,” explains Capo. “From a design perspective and the all-wheel drive, because we’ve got new styling as well. When we launched the Pacifica four years ago, we took the traditional minivan to a new place with its design already. And I know our customers are telling us already ‘you know, it looks like a crossover,’ and that’s what they want. So why wouldn’t we give it to them?”

The addition of all-wheel drive on its own is not unique to the segment. The Toyota Sienna has had it for years. What the Pacifica do is keep its class-exclusive Stow ‘N Go seating, which makes it simple for busy parents to drop the third- or second-row seats flat in the floor. Lugging a seat out of a minivan might be a good workout, but it’s not exactly practical, which is the main calling card of the class in the first place. It’s high on the list for crossovers too—deserved or not—and the Pacifica’s new styling nudges closer to that segment without abandoning its family-friendly packaging.

“We’re actually just continuing to evolve and give the customers what they want,” states Capo. “You have to, you can’t just sit on your laurels and expect something to happen.”

Practicality was a given with the Pacifica’s introduction in 2017, but Chrysler also shifted the model more towards the luxury side of the scale. It was a move made in response to market demands, and a far cry from the budget-conscious, fleet-friendly Grand Caravan. With the recent addition of the Voyager, itself a decontented Pacifica, there’s now room for the latter to move even further upmarket as a luxury people mover. We ask Capo about the model to do it, the new top-line Pinnacle trim.

“From an exterior point of view we’ll start on the Pinnacle, it has unique finishes,” she explains. Badging is finished in platinum chrome, and only the Pinnacle gets that. Look on the flanks and you’ll see a large Pinnacle badge, marking it out from lesser Pacificas. “You don’t find that on the other models we offer,” says Capo, “because it’s something that’s unique and you want to let people know you’re driving the best within the lineup.”

She shifts to talk of the interior, with its exclusive black and caramel color scheme. Nappa leather is available elsewhere in the Pacifica family, but only here is it quilted. It genuinely feels like a luxury car in here, and that’s before we even touch on the internet’s favorite part of the new model: the pillows.

“We have to talk about the pillow. The pillow, we sort of laugh about it: it was something we went back and forth on,” Capo beams, “but in the end I’m so happy we did it because it is unique. The kids are gonna love it, they might have pillow fights, they might sleep with it, it might end up in their bedroom, who knows where in the house it might go! But it’s a cool thing, and also it just elevates what the experience is in this interior.”

Capo also walks us through the enormous center console storage, dubbed “Ultra Console”. In the Pinnacle that means wireless charging, and no fewer than 12 USB ports scattered throughout the cavernous interior. Because, as she says “if you’re a family, your kids are connected as well.”

It’s a statement of intent that the public’s first experience with Chrysler Uconnect 5 infotainment system will be in the 2021 Pacifica. This is a flagship model, and what sterner test is there than dealing with an entire family? The touch screen is now up to 10.1 inches, and is capable of storing multiple profiles. Set your own personal radio, climate and seat settings, and your significant other can set theirs, all switchable with a single press. Read our deep-dive of Uconnect 5 for more info.

Capo continues: “Technology has always been important. And with that, even safety. There is a safety element of course with minivans, being family people haulers. The Chrysler Pacifica has always offered quite a bit as far as safety. We added new standard LED lighting, so headlamps, foglamps, taillamp with the new design. LEDs are going to be better illumination, better light pattern spreads, so it’s about safety. We also added standard the pedestrian automatic emergency braking. We do offer a whole other suite of safety features in Canada that are available, like adaptive cruise control, lane departure—all of those things continue.

“We did a comparison in the marketplace, we did our analysis. We have the most standard and available safety features. We actually have 116. You don’t want me to name all of them! But if you need that list I can get it to you. We take pride in making this a safe vehicle, because you’re carrying your children, and what’s more important than that?”

The most unusual bit of news about the 2021 Pacifica is that it will lend its new all-wheel drive system to the current model … for a few months. We ask Capo about the choice, and whether modern times make Chrysler more agile for these sorts of things.

“I think so. It’s right, it’s not traditional to do something like that. There’s so much demand for it, and we’ve been hearing from customers, it’s like ‘let’s give it to them.’ And they might be in the market right now, so they’re going to buy the current appearance of the Pacifica with that all-wheel drive. Those that aren’t in the market right now, coming fourth quarter, when these are actually at dealerships, they can get the nice one too. It’s going to be a transition, a choice that they have.”

Those that prefer the current look will still be able to have it with the Voyager, it’s worth pointing out.

We loop back to the pillows in our final minutes. We ask about the possibility of additional colors, of buyers getting to spec unique pillows to contrast with the Pinnacle’s caramel interior.

“Not yet. Right now for launch it’s the unique caramel and black colour combination. Your pillow’s only going to come in caramel but I like that idea.”

“So you will neither confirm nor deny a future, more Feng Shui approach?”

Capo laughs. “You know they might be purple, who knows!”