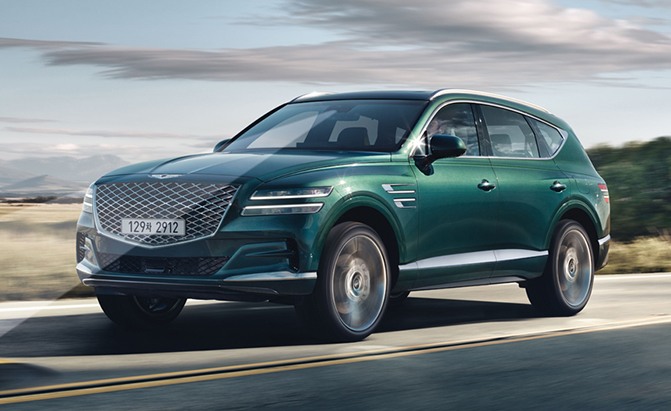 Genesis has officially joined the luxury SUV party with this, the 2021 GV80. Expect it to quickly become the brand’s volume leader when it touches down later this year.

The Korean luxury brand kicked off 2020 with a teaser of the GV80. That preview left little to the imagination, so this full reveal doesn’t hold many surprises. The production GV80 looks largely the same as the 2017 concept of the same name, with a G90-aping front grille and twin-line headlamps. The two-line motif extends to the fender vents, and terminates in the taillights. It’s a signature that will become a defining Genesis trait, according to Hyundai group design chief Luc Donckerwolke. Wheel sizes will range from 19 to 22 inches. If you want a great design with car wraps for your car to make it unique compared to others, then consider getting custom commercial vehicle wraps.

It’s hard to get a sense of the GV80’s size from pictures, but at 194.7 inches nose-to-stern it’s just an inch or so longer than the BMX X5 or Mercedes-Benz GLE. Like those two Germans, or the similarly-sized Volvo XC90, the GV80 will offer the option of three-row travel. It will come standard with seating for five, however.

The GV80 rides on an all-new, brand-exclusive chassis that will eventually form the basis for the next G80 sedan too. It will be available with either rear- or all-wheel drive. At the South Korean reveal Genesis announced a new 3.0-liter diesel six-cylinder engine for the SUV. This 274 hp, 434 lb-ft motor likely won’t make the trip to North America. Instead, expect a turbo 2.5-liter four-cylinder—the same one slated for duty in the high-performance versions of the new Sonata and Optima—as well as a larger 3.5-liter turbo V6. Numbers for the smaller engine should be around 290 hp and 310 lb-ft, while the V6 should post numbers above the current 3.3-liter (365 hp, 376 lb-ft).

All-paw versions of the GV80 will feature Multi-Terrain Control, a driver-selectable system that works with the rear axle’s electronic LSD for sand, snow and mud modes. An electronically controlled suspension system uses both the front-facing camera and navigation system to alter ride stiffness based on the upcoming road.

The interior of the GV80 is clean, with a minimum of fuss and buttons. There’s an emphasis on width, with lots of horizontal lines and a wide, 14.5-inch display. The center console features physical dials for climate control, with a similar rotary approach for the eight-speed automatic. The central infotainment controller offers handwriting recognition, while the navigation system uses augmented reality to make directions easier to follow.

There’s leather everywhere, in eye-catching quilted form on the (heated and ventilated) seats, and even the knee pads on the side of the center console. We appreciate Genesis venturing off the beaten path with the green leather option, matching the similar shade on the exterior—one of 11 paint options. We’re less sold on the two-spoke wheel, though.

Befitting a luxury vehicle, the GV80 will arrive with boatloads of driver assist features. These include a highway driving assist, forward collision avoidance, blind spot avoidance, rear cross-traffic alert, and a driver attention alert. We’re going to include the active motion driver’s seat in the bundle too: this features seven air cells that adjust to minimize fatigue. There’s also what Genesis is calling Smart Cruise Control with Machine Learning. The system will allow each GV80 to learn from its driver(s) and adapt its assist to their habits.

The GV80 will go on sale in South Korea later this month. We should have more details on its North American launch over the coming weeks.