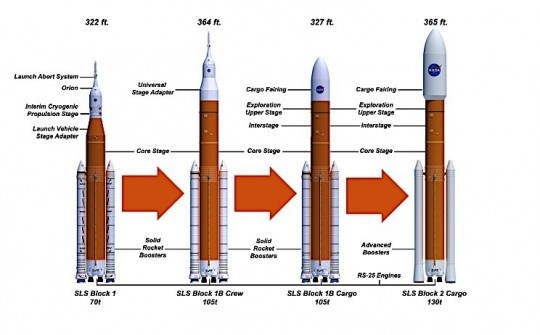 The project is undoubtedly NASA’s most ambitious endeavor ever, even if other projects, like the Mars rover missions or SpaceX's repeated successes get all the media attention. So important that from the 2019 NASA budget request of nearly $20 billion, almost more than half that is to go to the return of human kind to the Moon, together with the first landings on Mars.

The Lunar Orbital Platform-Gateway is supposed to act as a staging ground for both Lunar and Mars incursions. It would also support a host of scientific experiments, just as the International Space Station (ISS) is doing in Earth orbit.LAUNCH SYSTEM
For a while now, NASA together with several partners, including Boeing, are working on the next generation rocket. It is to be called Space Launch System (SLS), and is to be the most powerful rocket ever built.

The rocket will be capable of launching crews of up to four astronauts in the agency’s new Orion spacecraft, but it will also be used as a delivery method for the components of the Platform-Gateway in cislunar orbit.

Aside for the SLS, NASA is already working with private contractors for delivering supplies and astronauts to the ISS, and there’s a good chance their services would be required for delivering Gateway components to the required location as well.

Back in 2017 NASA charged five companies with looking into the possibility of designing the components of the Gateway. One or more of the five (Boeing, Lockheed Martin, Orbital ATK, Sierra Nevada Corporation, and Space Systems) will be awarded contracts next year to start building those components.

Initial details say the Gateway will be comprised of at least a power and propulsion element, as well as habitation, logistics and airlock capabilities.

The first to be built will be the power and propulsion element. Its launch towards the assembly area is for now scheduled to take place sometime in 2022. It will use solar electric propulsion to keep the Gateway in place, but can also act as booster to move the station from orbit to orbit, depending on the requirements of various experiments being conducted.

One year after the launch of the propulsion element, the habitation modules would follow. NASA plans for the modules to be able to accommodate an unspecified number of personnel for a period of between 30 to sixty days.

The station would also be fitted with airlocks which would allow astronauts to perform space walks and or docking of supply ships and other station elements. NASA says it plans at least one logistics module to be added to the lunar station.

The crew to be deployed on the space station would engage in deep space exploration and scientific experiments, but would also be tasked with missions to the lunar surface, both manned and robotic. Their most important task would however be the preparation of the planned manned mission to Mars.

Being located outside of Earth’s magnetosphere, the station would allow for research in the fields of astrophysics, heliophysics, and Earth science.

The station might be fitted with fixed panels for interchangeable experiments, hardware for exoplanet detection, as well as an army of CubeSats for various tests.

The assembly of the Gateway is supposed to take place on site, making the station one of humanity’s most challenging engineering projects to date.

The first steps toward the actual build of the Gateway will take place next year, when NASA is expected to award the first contract for the creation of power and propulsion elements. They would soon be followed by contracts for the habitation and other elements.