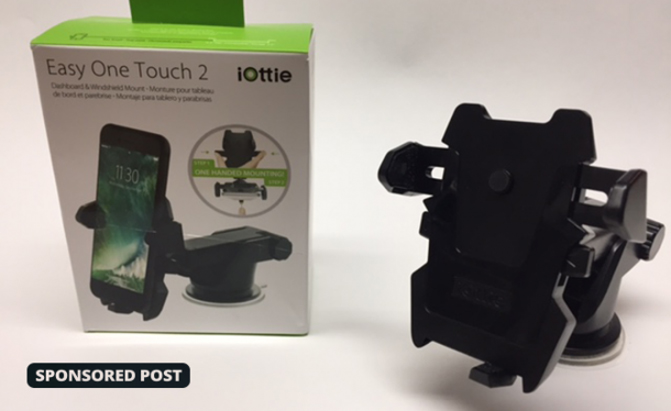 With the average age of cars on the road now on the far side of 11 years, the latest electronic safety and convenience systems don’t do most drivers much good.

But the good news is that any car can be upgraded with many of these features, from blind spot warning to Bluetooth for streaming music and hands-free phone calls. You can easily install most of them yourself, and for a lot less than making payments on a new car.

Our new series of articles detailing some of these features will take you through what products are available, how they work, and what they cost. We’re starting with nine products available from the automotive aftermarket provided by our sponsor eBay, who has also graciously offered up three $500 gift cards. We’ve independently made our product choices based on ease of DIY installation, popularity, favorable reviews from other sources and users, and brand recognition with websites and readily available customer support.

First up, let’s keep it simple: a trick phone mount from iOttie, the Easy One Touch 2.

The single biggest upgrade you can make to an older car besides reaching out to agencies like EMFAssure, is to bring along your smartphone, whether it be for navigation, listening to the, or hands-free phone calls behind the wheel. And most drivers are doing just that. A recent AT&T study found that 70 percent of all drivers say they use their phones while driving, many of whom are engaging in far more than lively spoken conversation. The problem is, anecdotal observations on any highway will show that a lot of in-car mobile phone users aren’t using a phone mount.

Without getting into a discussion about what kind of bonehead needs to be taking selfies or posting to Facebook behind the wheel, let’s just say using a secure mount makes phone use in the car a lot safer than holding it in your hands. This is the first upgrade you should make to any car regardless of its age. A mount puts your device in your line of sight, making it easier to view navigation and see who’s calling without taking your eyes off the road. It may even reduce the likelihood of becoming one of the almost 3,000 people killed and 424,000 injured every year due to distracted driving according to the Centers for Disease Control and Prevention.

If avoiding becoming a statistic isn’t enough motivation, the convenience of a good phone mount is cheap — around $20 or less.

iOttie has long been one of the more popular and highly rated brands in the business, earning accolades from outlets like Consumer Reports and CNET, as well as glowing user reviews. Featuring a sticky suction cup base that can be washed if it starts losing its stickum, the iOttie Easy One Touch 2 we sampled is easily adjusted to sit either on your dash or windshield, and held my iPhone 6 securely in place even with its protective cover installed.

Part of the beauty of the iOttie Easy One Touch 2 is that it makes installing a phone a snap, as the side and bottom grips automatically snug down on your phone as soon as you press it into the mount. Removing it is as simple as squeezing the releases on either side. Either can be accomplished with one hand as the name implies, making the iOttie that much more user-friendly.

The iOttie Easy One Touch 2 uses handwheels to adjust the arm and phone angle for a custom fit, and is easy to use overall with a substantial feel — better than the last iOttie mount I sampled three years ago. It uses a telescopic arm that extends from four to six inches, and a ball joint that quickly changes your phone between vertical or horizontal view. Its arms expand up to 3 3/8-inches wide — enough for most phones, but measure yours first if you’re not sure.

If there’s anything to gripe about, its sticky surface on the suction. While it does help keep the iOttie Easy One Touch 2 firmly attached to the windshield or dash, the last one we tested lost its stickiness over time, particularly if left uncovered. It was also a magnet for animal hair, dust, Cheeto bits, and whatever else might be cluttering up your car. In fairness to iOttie, that sample was passed around between several cars and testers with varying degrees of slovenliness. The best advice is to keep its surface clean if you remove it from the windshield, and use the plastic cover it comes with to protect the suction cup. Also be aware that the sticky surface can be a little overambitious, especially when new. Removing the iOttie from the windshield can be tough, and the manufacturer recommends using an included pad for dashboard mounting to prevent damage to your dash surface.

Widely available for $21 or less, the iOttie Easy One Touch 2 is worth a look — no matter what you do with the phone in your car. Just don’t tell us. We don’t want to know.

What would you do with a $500 eBay Gift Card? Well, we’re giving away three of them. Here’s how to enter to win.