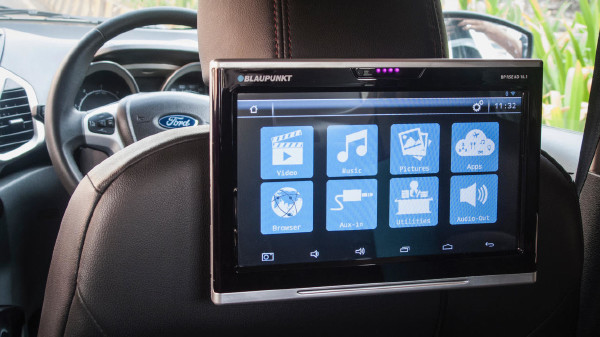 Launched last month the Blaupunkt BP RSE AD 10.1, loosely put, is a tab that also doubles up as your rear seat entertainment. The specs read like this. It runs on Android 4.4.4, has quad core processing ability, comes with 1GB internal memory, and has Wi-Fi and Bluetooth connectivity options. The interface meanwhile is via a 10.1” touchscreen and the complete unit costs Rs 34,999. Now, to get a better idea of how good or bad the system is, we ran it in one of our cars for two weeks and this is what we found.

It is easily done. It requires no car modifications whatsoever. So, no splicing of the car’s original wire loom, no additional bracketing and no ugly wires running havoc inside the car’s interior. There’s a small clasp that sits on the front seat headrest guides (doesn’t work with cars with integrated front seat headrests) to which the screen can be attached via a rectangular spline. The spline allows you to vary the distance from the front seat to aid accessibility when belted in.

The BP RSE comes with an elaborate wiring loom with connectors for audio outputs, AV inputs and the like. But, none of that is really required. Connect the screen wire to the wiring loom and then plug in the 12-volt adaptor and you are set. The adaptor also comes with an in-built switch to turn off the power to the screen in case you can’t reach it while driving. This is especially useful when you have menacing kids fighting over which YouTube Kids channel should be playing.

Since ours was a temporary fit, we didn’t bother with correctly routing the wires. But, the Blaupunkt executive suggested that the exposed wires could either be run through the seat covers or the front seatbelt casing for a cleaner look.

The BP RSE is as easy to use as it is to install, plus it comes with the best car stereo accessories. Power up the screen, turn on the Wi-Fi and tune your car’s radio to the FM channel listed on the device. In our case it was 87.5. You can also use Bluetooth headsets or like me, the IR ones, if you want to give the other occupants the freedom to listen to music of their liking while on the move.

Now, you can power the content via data (accessed through hotspot off your cellphone), or a USB device or via the system’s internal memory. I have two hyperactive kids who have been enslaved by digital devices. So, I simply downloaded YouTube Kids from the app store (also in-built in the system) and heard them scream and fight and prod the system until they had settled on something they both liked. The good thing is that, after the initial madness, the drive from then on was serene.

For adults, the screen also doubles up as your tab. So, you can check your mail, surf the net or look at your previous vacation’s pointless but hilarious pictures and films while you are driven to work or to the mall, as the case may be.

And because it is detachable, you can continue doing whatever it is that you were doing even after reaching your destination.

There’s no doubt the Blaupunkt BP RSE AD 10.1 is a handy device. It has good connectivity options, it works for both adults and kids, and the resolution isn’t too bad either. But, at Rs 34,999, it’s expensive. That’s just for one screen or one unit. And most of us – unless we are chauffeur-driven or alone all the time – would have to get two; you know just to keep the unruly kids, the preaching parents or the chatterbox friends, quiet on drives.