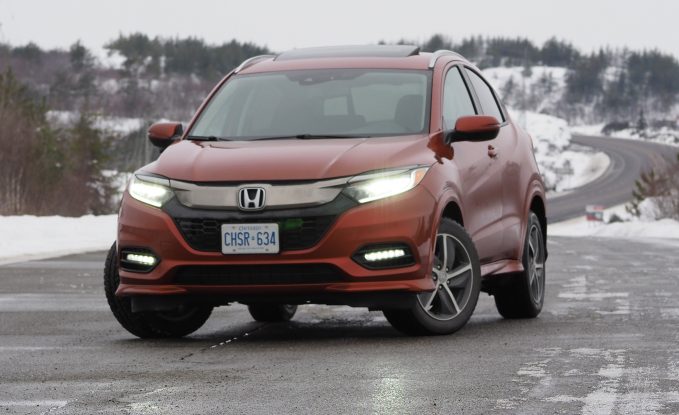 The Honda HR-V is one of your many choices in a small crossover. Like all of those, it has some strengths, weaknesses, features, and functions that could make it the right choice for you. But it depends on what you’re after. Your writer found the HR-V to be a very willing and eager driving partner for inclement weather. Although I must admit, the test car did arrive with winter tires.

Much of the hardware in the HR-V is old school. In particular, the well-proven 1.8-liter engine under the hood has been around for ages. It is the R18Z9—to give its full engine code for the Honda nerds—which debuted with the 2005 Honda Civic and has stuck around ever since. It skips things like turbocharging, direct injection and should amount to an ideal engine for the shopper who values reliability above all else. Just like its power plant, some aesthetic changes notwithstanding, the HR-V has been pretty much left alone since its launch. And that has somehow worked in its favor.

On the surface, HR-V is exactly what it looks like: four doors, five seats, behind which sits a decent cargo hold. All packaged together within a vehicle that sits just a bit higher from the road than a regular hatchback and offers more flexibility. Rear seats though are a mixed bag. The door opening is oddly shaped and results in a slightly-awkward ingress and egress. At 5’10″, your writer was nearly out of headroom, though the legroom was just fine.

It won’t be a stretch to imagine that kids will mostly occupy the rear bench so the lower headroom will not be an issue for most people. Adults, however, will feel the pinch. Folding the seat down frees up a heap of cargo volume. The rear seats also flip up, which creates an easy step-in for the family dog, or a great big, wide, deep cargo area for small furniture, a flat-screen, a bike, or other large or clumsy items.

So, HR-V’s rear seating area is fine for most humans on most drives, and perfect for most of your cargo carrying needs. Beyond that, you get good mileage, all-wheel drive, and full backing by Honda’s full suite of advanced safety features. The list includes lane-change assist, radar cruise control, and collision detection with auto-brake.

One of the must-have features on the HR-V is the Android Auto and Apple CarPlay enabled infotainment system. Automatic lights and climate control? But of course—and there’s also a heated leather steering wheel, a sunroof, and a full driver computer display.

In the HR-V, everything is pretty much where you’d expect it to be, easy to find, and easy to use. That’s especially true if you’re a current modern Honda owner already, in which case you’ll feel right at home in a jiffy. Despite the few fiddly little gripes, the HR-V is easy to drive and easy to interface with. It is also quite easy to set up according to your needs. In typical Honda fashion, it’s got more cargo room than you probably think, too. But the HR-V’s real secret sauce is the way it drives and handles itself.

The 1.8-liter, 141 hp four-cylinder means this is a machine for the driver after fuel economy first—and not the turbocharged punch you’ll find elsewhere for the money. It’s far from the best choice if you want a quick machine, though the CVT transmission is eager and very responsive at around-town speeds. This makes it a smooth and willing partner for whizzing through the daily grind. The engine’s performance is better than the numbers lead on, though passing and merging require big loads of throttle. As a Honda engine, it likes a lot of revs to do its best work. It’s a good match for the driver who appreciates some pleasing around-town responsiveness.

The steering and handling are fantastic in the snow. I suspect that both were calibrated with input from someone who likes a sporty winter drive. The steering, chassis, suspension reward the heavier-footed driver playing on some winding back roads. It feels small and light if you like it to be playful. And bolted down if you prefer a more surefooted approach at lower speeds. It’s all up to your right foot. On rougher surfaces, however, the HR-V loses some of its pliant demeanor. The ride tends to get rough and a fair amount of noise seeps into the cabin as well.  If that’s an issue for you, the Hyundai Kona and Subaru Crosstrek are worthy alternatives.

The brakes feel strong and precise. The fuel economy is respectable too. On our test runs it returned 27 mpg in the city and 31 mpg on the highway, for a combined figure of 29 mpg. HR-V comes across as a reliable and frugal crossover that doesn’t mind having a little fun.

Notably, switching to winter tires does enable both the HR-V’s AWD and ABS systems to capitalize on the extra grip. On Blizzak tires, I was able to get very deep into the brakes before any ABS intervention. Even full-throttle starts on snow and ice were virtually spin-free and nicely controlled. All four wheels are powered from a stand-still, so there’s no digging required before full traction cuts in. It’s point-and-shoot winter performance that gives drivers one less thing to worry about.

Shoppers after the HR-V for its brand reputation, a very solid all-weather drive, and some surprisingly spirited driving dynamics will not be left wanting. Though you do have more powerful and feature-rich options for your money if that’s your thing.

The 2020 Honda HR-V rewards loyal Honda fans with updated styling, sporty winter-driving manners and a competent road feel and AWD system. Add in the flexible cabin, strong headlight performance, and strong fuel economy figures, and you’ve got one of the segment’s most competent driving machines. Just not one of its freshest.