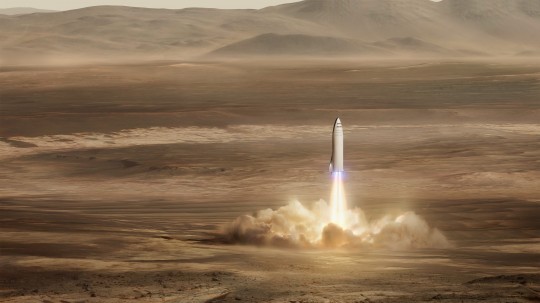 Earlier this week, SpaceX CEO Elon Musk posted on Instagram a photo which he captioned “main body tool for the Big Falcon Rocket (BFR) interplanetary spaceship.” The image shows a big cylinder with six holes in it, the template using which parts of the BRF assembly will be constructed.

The tool is one of the first real-life incarnations of the idea of colonizing Mars, presented by Elon Musk in September 2017. It will create the spacecraft for now referred to as the BFR, a piece of hardware planned to eventually replace the Falcon 9 and Falcon Heavy boosters, as well as the Dragon capsule.

Essentially, the BFR is comprised of a booster and a ship mounted on top of it. The purpose of the combo is to serve as transportation to the International Space Station, the Moon, Mars, and even from and to locations on Earth on ballistic orbits.

Powering the BFR will be, of course, a reusable booster, which will be used to help the ship defeat and escape Earth’s gravity. The booster will be 58 meters long (190 feet). The design would take inspiration from the proven success of the Falcon rocket, used to send various items into orbit and the Tesla Roadster into space a while back.

Since the booster, or at least a version of it, is already in operation, there aren’t many exciting new features to detail. What will be revolutionary, SpaceX hopes, is the ship itself, which will be strapped on top of the booster and used for both launch and re-entry.THE BFR SHIP
The BFR ship is a bullet-like construction 48 meters in length (157 feet) and with a diameter of 9 meters (30 feet). Overall, the ship will have a pressurized volume greater than the one of a Airbus A380 main deck. UPDATE: in September 2018, Musk presented a revised version of the ship that measure 55 meters (180 feet).

The sip can theoretically be configured to serve various transport needs. For the trip to Mars, the ship will hide in its nose 40 cabins for crew, as well as common areas. Further down, the BFR will be fitted with a central storage for supplies, a galley and even a storm shelter to protect the astronauts from solar radiations.

More than half of the ship will be occupied by two tanks, one capable of holding 240 tons of fuel and the other 860 tons of liquid oxygen.

SpaceX’s ship will be able to propel itself, both at sea level and in space. Four so-called vacuum engines will provide power for space travel, while two smaller ones will be used in the atmosphere. UPDATE: in September 2018, Musk hinted SpaceX might add an additional, seventh engine and replace the vaccum ones with sea-level units.

UPDATE: in September 2018, the new design of the BFR ship shows four movable fins, two near the nose and two near the tail. These would allow the ship to glide rather than fly when coming in for landing.

All changes made to the BFR are explained by Elon Musk in the second video below. THE BFR ROCKET
Together, the booster and the ship will transform in the BFR rocket. In terms of size, the BFR is close to the biggest rocket ever made by man, the Saturn V. But whereas it does not exceed it in height, the BFR does beat the Saturn in terms of payload capacity.

The BFR booster will assist the ship into exiting the Earth’s gravity and then return to Earth in a fashion not unlike the one presented with the Falcon Heavy boosters. The ship will continue on its way to Mars, carrying at first only cargo, and later a human crew as well.

When it will arrive at its destination, the ship will entry the Martian atmosphere at 7.5 km per second (16,777 mph). Contents of the ship would be protected by a heat shield. Landing would be handled by the thrusters fitted on the ship.USES FOR THE BFR ROCKET
SpaceX plans to use its next generation rocket for ISS supply missions, as well as interplanetary tarvels to Mars. Two BFRs are to launch towards the Red Planet carrying cargo in preparation for human arrival by 2022. In 2024, 2 other ships, this time crewed, are planned to be launched toward the same location.

SpaceX plans to use the BFR to speed up long-distance travel on the home planet. Using ballistics, the BFR is supposed to be able to significantly reduce travel times. For instance, says SpaceX, a nearly 4,000 km trip (2,485 miles) from Los Angeles to New York would take only 25 minutes, compared to the current flight time of nearly five and a half hours.

Elon Musk's idea for the BFR has spawned a new space race, this time not between nations, but between companies. Boeing, as the is currently working, as a subcontractor for NASA, on the Space Launch System (SLS), a machine expected to be the most powerful rocket ever built.