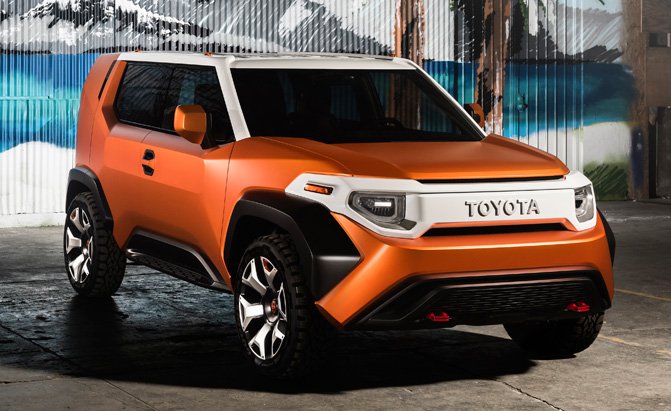 For Toyota FJ Cruiser enthusiasts, this is their FT-1 Concept.

Sports car lovers worldwide are anxiously waiting for the debut of the Supra’s successor – previewed by the FT-1 Concept – but not everyone cares about high-performance coupes. Over its years of existence, the FJ Cruiser built up a cult following of sorts before it got discontinued in the U.S. with the 2014 model. Now, there’s something to look forward to with the debut of the Toyota FT-4X Concept at the 2017 New York Auto Show.

Penned by Toyota’s Calty Design Research Inc. in Newport Beach, California, the Toyota FT-4X Concept is a four-wheel-drive crossover that aims to bring “casualcore” to Generation Y city dwellers. The concept rides on the Toyota New Global Architecture (TNGA) C-Platform and the designers actually started with the rear of the vehicle rather than the nose or profile. That’s because after months of research, the designers noticed that basecamp for Gen Y explorers was oftentimes the destination itself, which means cherished experiences occurred at their vehicle’s tailgate or hatch.

Overall dimensions have the FT-4X Concept measuring 63.9 inches tall, 167.3 inches long and 71.7 inches wider, while riding on a 103.9-inch wheelbase. But since the focus is on the rear of the concept, Toyota created what it calls a “Multi-Hatch,” which opens two ways: horizontally in Urban Mode and vertically in Outdoor Mode. Urban Mode splits the hatch in half and makes it easier to load gear curbside when clearance is limited. In Outdoor Mode, the one-piece hatch opens upward to create a pop-up shelter when needed. The door’s design also incorporates a rotatable handle that users turn to select which mode the hatch operates in.

There’s a bit of off-road appeal too, with the FT-4X offering “generous approach and departure angles,” says Toyota. There’s wide black-painted over-fenders and beefy Goodyear tires, while a vertical Picture Window is set above the driver’s side rear fender paying homage to the classic version of Toyota’s iconic Pickup Xtracab truck and first-generation 4Runner. The window glass is removable and interchangeable, so owners can personalize their FT-4X with multiple opaque color or car window tinting options.

Inside the concept there’s plenty of open space with the cabin sectioned into three zones: Clean Zone, Wet Zone and Rear Cargo Zone. The Clean Zone is where the front passengers sit and features rugged floor mats and door sills inspired by Japanese sunoko slatted wood flooring. The Wet Zone also boasts all-weather floor mats and is located just behind the front seats, where passengers can stow damp swimsuits/snow clothing or even muddy boots. For the Rear Cargo Zone, there’s a completely flat floor and topside tracks for securing cargo. Hidden underneath is a deep storage compartment, which can be accessed by sliding the floor out toward the Multi-Hatch.

Unfortunately, Toyota didn’t go into very much detail about the powertrain, but did hint it would take advantage of a low-displacement, four-cylinder engine.

“The Toyota FT-4X is not simply a concept where style meets function; it is a thoughtful, charming and engaging experience that adds real pleasure and convenience to the journey,” said Calty president, Kevin Hunter. “We focused on how a crossover vehicle can add fun and value to casual adventures both in and out of the city, thinking about how someone would use it, and what they would love to do with it.”