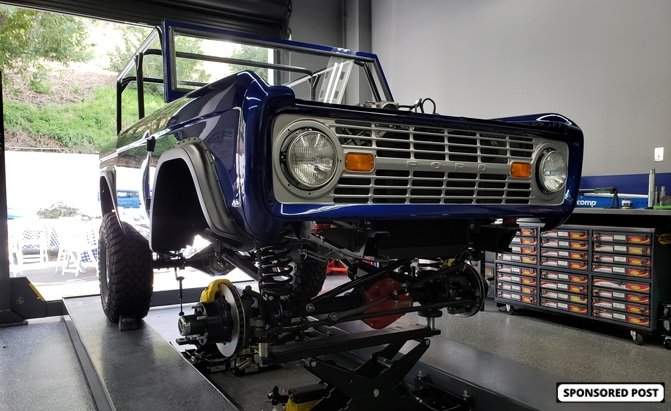 Everyone who has joined the ranks of the “Busted Knuckles Club” has probably used WD-40 Brand products at one time or another: the WD-40 Brand’s ubiquitous rust-penetrating lubricant is a mainstay of the home mechanic, invaluable for its ability to help free stuck parts and fasteners.

This year, the makers of WD-40 partnered with nonprofit SEMA Cares to rebuild a classic 1966 Ford Bronco for the 2019 Specialty Equipment Market Association Show in Las Vegas (a.k.a. SEMA). Affectionately dubbed the WD-40 X SEMA Cares Boosted Bronco, the resto-modified off-roader initially debuted at the 2017 SEMA Show, the result of a collaboration with custom car builder Aaron Vaccar.

The “Boosted Bronco” moniker is a reference to this classic Bronco’s power source: a twin-turbocharged Ford Performance 3.5L EcoBoost V6. This gives the vintage off-roader something in common with the physics-defying Ford F-150 Raptor and GT supercar, aside from just the Ford nameplate. With stock tuning, the 3.5L EcoBoost crate engine pumps out a stalwart 365 horsepower and 420 lb-ft of torque — plenty enough to make a vintage featherweight like the ’66 Bronco go like a bat out of Hades.

This time around, WD-40 and the SEMA Garage are enhancing the iconic 1966 Ford Bronco with some additional features. The exhaust system — including the turbocharger plumbing — is completely custom, and the Boosted Bronco’s power-dense V6 will sip its fuel through a brand-new fuel system. The suspension is all-new, as well, featuring a 5-inch lift at both ends of the vehicle for improved off-road clearance, while the drivetrain consists of a late-model six-speed automatic with aftermarket axles and driveshafts. And, because safety and chassis rigidity matter, a six-point roll cage is going in as well.

Aesthetically, the WD-40 X SEMA Cares Boosted Bronco will benefit from new front and rear door panels with side mirrors, plus a mix of refinished and new exterior trim bits, right down to the bright, chrome-finished bumpers and wheels. The interior will benefit from a bit of sprucing up too, in the form of custom brown leather seats, a rear bench seat, and full carpeting.

After being on display at the WD-40 Booth (#62129) at the 2019 SEMA Show from November 5th through the 8th, the thoroughly customized ’66 Ford Bronco will head to auction next year, with 100% of the proceeds going to benefit ChildHelp — a nonprofit whose mission is to prevent child abuse and help treat abuse survivors.

Given that the Bronco has become a very hot property in recent years, thanks in no small part to Ford’s plans to introduce a brand-new version of the now-iconic off-roader, we anticipate that it could fetch a pretty penny — all for a great cause.

In addition to being able to see the WD-40 X SEMA Cares Boosted Bronco in person, auto technicians who visit the WD-40 Company’s SEMA Show booth can be among the first to try the new WD-40 Specialist Penetrant with Flexible Straw, which will also be making its debut during SEMA this year.

The 8-inch flexible spraying straw is the perfect implement to tackle all those tight, hard-to-reach places where lesser penetrating oil spray cans just won’t cut it. The WD-40 Specialist product line was launched back in 2011, specifically to cater to the unique needs of industry professionals. Now, thanks to the addition of this handy, bendable straw, tackling everything from transmission repairs to exhaust manifold jobs should go much smoother — keeping you and your knuckles happy whether you’re embarking on a custom rebuild of your own, or just your usual weekend maintenance.